Readers will remember the fluster that occurred earlier in the year on this subject when it was revealed that in a secret session last December the Council had decided to sell two ‘surplus’ houses so it could use the money to fund its organisation.

Most of that issue was addressed in earlier posts, however, of more importance is the situation regarding the Council’s pensioner units.

Just this morning, TV One Breakfast was reporting that throughout the country, in the first quarter of this year, emergency hardship grants processed by the Ministry of Social Development totalled 472,000 — more than double the number in the same quarter in 2014.

Much of the problem is caused by high and increasing rents, particularly in Auckland, but Kapiti is not immune from that.  The more that property values increase, the more that landlords will want.  As we reported recently, the Treasury sees a slow but steady increase, not a fall in property values.  It’s highly unlikely that the problem is going to reduce anytime soon.

As can be seen, we had to involve the Ombudsman to get a proper response to our questions, but the most important table is the one in the first letter dated 20 March 2019 which shows that the KCDC’s social housing stock brings in a lot more money than it costs. That alone demonstrates that there is no reason to sell this stock, particularly when there is little short to medium term prospect of it being replaced with central government stock. 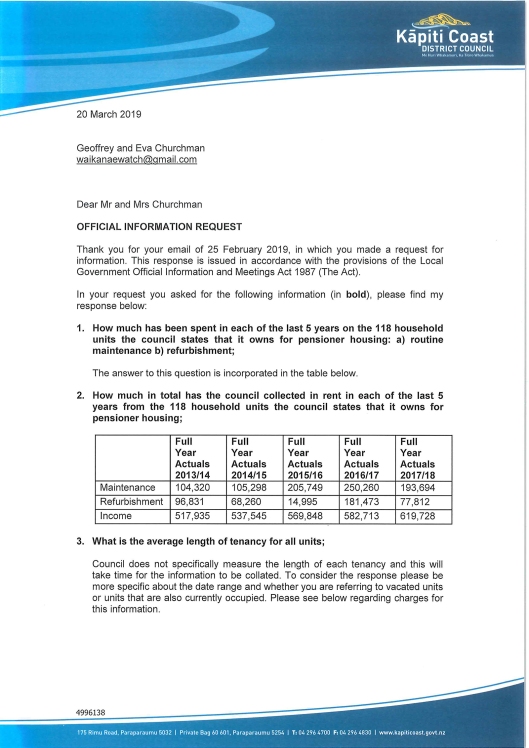