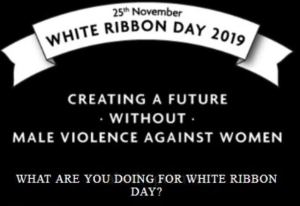 We have seen questions asked about the lack of mention of this day, marked yesterday, by the Kapiti Council, so Geoffrey had a chat with Cr Rob McCann today on the subject, with his long time involvement in this anti-bullying, anti-violence campaign.

Some readers will remember that in 2015 the KCDC self-declared itself to be a White Ribbon council, apparently instigated for political purposes by then Councilor Penny Gaylor, and banners were reportedly displayed the length of Kapiti Road. It resulted in Rob McCann telling the KCDC to ‘cease and desist’ as it had done nothing to meet White Ribbon’s three-stage accreditation process.

Not only that, it was bringing the organisation into disrepute as there were in that triennium complaints around the council table about bullying within the council and the common denominators in those complaints were the then Mayor Ross Church, then Chief Executive Mr Dougherty and Gaylor herself.

In 2015 the White Ribbon riders were welcomed at a function at the Paraparaumu Community Centre (although only two of the then councilors bothered attending — David Scott and Jackie Elliot.)

To date, only four of the country’s 77 local councils have passed the accreditation process as it requires more than just a statement of support for the principle.