I know it’s not much, but it’s okay
Keep on moving anyway.

Friends who have kept exercising

I have a number of friends who have battled with cancer. The survivors have all included exercise as a key element of their recovery regime.  One friend had bladder cancer and underwent surgery and is now in remission. He is a regular Park runner and cyclist, and is convinced that the exercise he continued with during his treatment, was a big factor in his recovery.

Another friend had cancer tumours on his skull, neck and ear. He had long chemotherapy sessions which didn’t seem to help. Then he got into a world-wide group infusion programme which was based around getting the body’s immune system to fight cancer cells. The tumours have virtually disappeared. He is another regular runner and also a gym man.

Not everyone with cancer is as fortunate as these two friends, however manageable exercise is always helpful. I have another friend in Auckland who has been a great walker doing distances up to half marathons. With liver and pancreatic cancer, he is now pushing a walking frame, but is still getting out on nearby streets.

The value of exercise

Moving keeps the blood circulating, the muscles working and the mind active. Exercising regularly has no disadvantages and is great for maintaining your fitness and lowering your blood pressure.

Exercise is also therapeutic, as in Ian Gawler’s words it is a powerful antidote against depression and leads generally to a more positive state of mind. However, it is important for people recovering from cancer to make sure that their exercise is manageable. After a session they should feel better and not exhausted. Walking or jogging for example, should be at talking pace and this can be tested when going out with other people. Doing something every day is desirable and mixing it up and having company ensures that it doesn’t get to be chore.

Graham Clouston is a prostate cancer survivor and his story is outlined in the third article – see 7 November. His varied exercise programme is outlined below.

Being positive is a critical part of recovery and healing. For people who have been through cancer treatment and surgery, choosing to be positive is vital. Exercise can be a critical element in  recuperating and setting a programme with goals is highly desirable. However, making the schedule manageable is important to avoid disappointment and negativity. Achieving the day by day ‘tasks” is positive and therapeutic.

Obviously in completing their set exercise schedule, say by the end of a week, cancer survivors can then reassess what is possible in the time ahead. 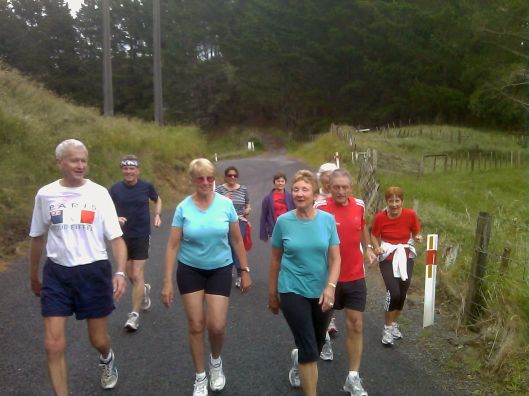 Long term, big things may be possible. I have another friend who is a cancer survivor and had one breast removed many years ago. After what she had gone through, Judith was determined to become a top triathlete in her age group.  She has since completed a number of half and full Ironman events as well as many long-distance swims, and is now nationally ranked at number two in the 60-64 age group.