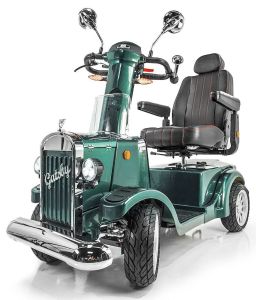 This is a relatively recently formed social club of a small number of Waikanae’s estimated 300 or so mobility scooter users.  Geoffrey was invited to the March meeting

In a nutshell, their objective is to have fun together both at meets and in outings on their vehicles. At meets they have interesting speakers.  They have had outings as far as places like Wellington Botanic Gardens, the Zoo in Newtown, The Beehive and Parliament and the NZ Police Museum in Porirua.  The trains are good for mobility scooter users going south, but public transport is not good for destinations north of Waikanae.

Rather like cars, mobility scooters come in a variety of sizes and styles, but all have the feature that they are battery powered, so meet the fashionable ‘low carbon footprint’ expectation. You can pay an annual membership fee of $13 to the AA in return for which you can summon assistance if you suffer a flat battery. The range of the vehicles on a full charge can be as much as 50 km, however.

But unlike cars, they do not get government registered, there are no Warrant of Fitnesses (a reason for not buying a second-hand one) and they are not allowed to be driven on the roads unless the adjoining footpath is not in a suitable condition.  They say speed on footpaths shouldn’t be higher than 10 km/h.

There are several places where they feel the KCDC footpaths in Waikanae aren’t good for Mobility Scooters and this is something which Geoffrey with his Community Board Member hat on intends to look at very soon.

1 thought on “Getting mobile with the Waikanae Mobility Scooter Group”