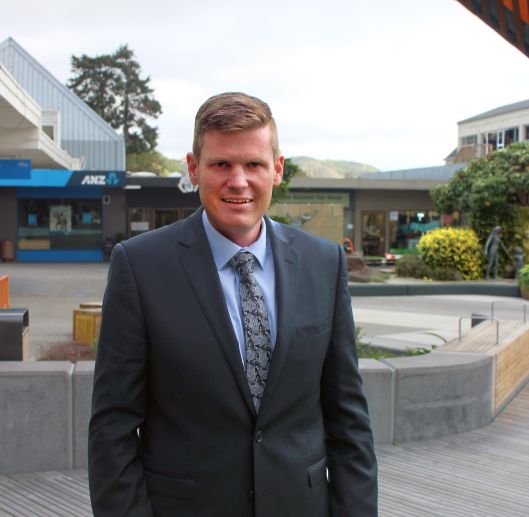 On meeting Tim Costley he impresses as being just about all you could want in an MP – intelligent (he has a Master’s degree in International Defence and Security, a Bachelor’s Degree in mathematical Physics and a Diploma in Business), World-wise, aware of the challenges facing today’s young families (he and his wife have three daughters), tall (6’4”), good looks (which help gain media notice); but most importantly, he has a genuine interest in helping people, which as a rescue helicopter pilot in the Air Force, he has done in a way that few could.

The Air Force provided him with a range of varied experience, from combat zones — dodging sniper fire and rockets from the Taliban and Al Qaeda in Afghanistan, rescue missions — to working for members of the British Royal Family, primarily William and Kate.

Over coffee in Mahara Place, we talked about the issues that not only concern all Kiwis, but specifically those that apply to our area.

He says he’s standing because he believes the country can do better, that there are greater things to come for our towns and regions. “I want my three daughters to grow up with hope for the future, knowing there is a pathway to a decent job, knowing they will be able to have a roof over their head and a safe community for their families to live in, knowing that if they work hard they can do well in New Zealand. I want them to live in a country with world-class public services funded by a strong economy. I’m standing because I’ve played my part through the Air Force, but we need good, strong, competent people representing us, and I’m willing to stand up and offer to do that for our community.”

That might be seen as a standard ambition for politicians generally, but what does he see as the biggest local issues that he will need to address as the MP for Otaki?

He says his focus will be:

What issues for the country particularly motivate him?

“My motivation is to serve my community. I want to tackle the growing divides between rich and poor, urban and rural, big metropolitan cities and struggling regions, educated and uneducated, university degrees and trades and apprenticeships. While my background is in defence and security, my experience is really broad, and one of my biggest strengths is my ability to work across almost any area; to be able to quickly adapt to new topics, learn fast, understand and respect the culture and customs of that part of our community, and then be able to lead effectively through the challenges that may lie ahead.”

Tim says that as a really tangible example, he joined the Air Force to fly helicopters, but was also the sole Kiwi in Papua New Guinea planning elections in 2012. He ran disaster relief operations in Fiji after Cyclone Winston, he evacuated Rena when it ran aground, “I was deployed to Afghanistan, did search and rescue in New Zealand as well as other humanitarian operations. He also did operational tours peace-keeping in East Timor and the Solomon Islands. I was not specifically trained to do many of these tasks, but I was selected for my ability to quickly adapt to the new task and new environment, and be able to work well in tough situations. So while I’m passionate about education, police, defence, transport and infrastructure, whatever issues constituents may bring into my office, they will find in me someone who is willing to listen, able to understand, and can fight for them to get the results they deserve.”

And what does he see as being the biggest shortcomings/failures of the present government? Unsurprisingly, there are several that he lists:

1 thought on “ready to be the next MP for Ōtaki — now Waikanae resident, Tim Costley”