A big thank you to everyone who has pitched in to our campaign against the Government’s legislation to cancel referenda on the introduction of Māori seats.

Funded by supporter contributions, this morning we were able to publish a full-page ad in the Dominion Post: 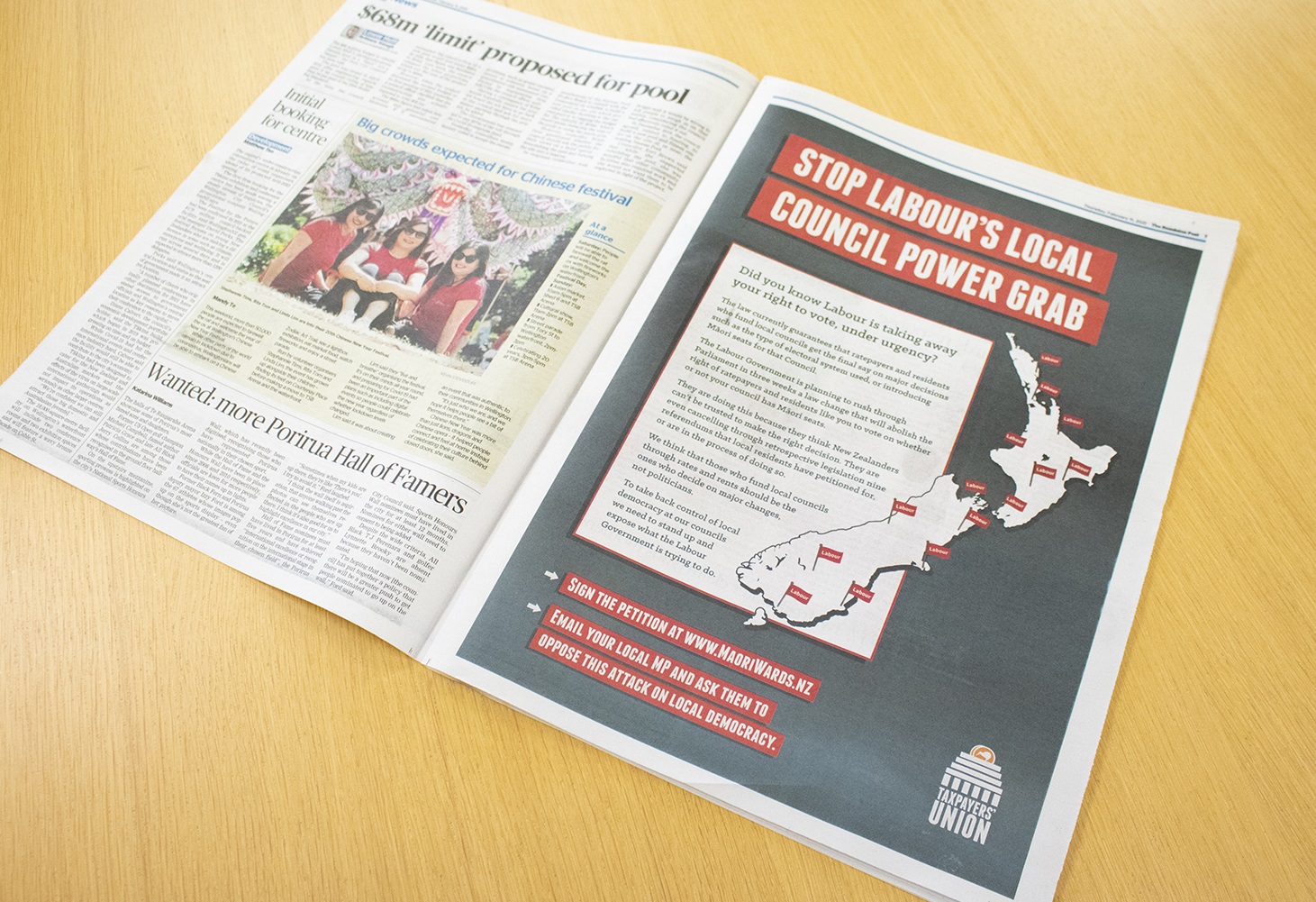 This demonstrates to the politicians and bureaucrats in Wellington that we are serious about fighting this legislation every step of the way. Labour are using Māori wards to gerrymander (stack the deck) in their favour and take away Kiwis’ democratic rights. That means more left-wing councillors, and higher rates.

The Government is using urgency to ram through this legislation in just three weeks. In fact, they’re only allowing two days of public submissions, starting yesterday! [Submissions close on their antidemocratic Bill at 5 pm today — Eds]

Your submission can be brief. I suggest being polite, and pointing out how it is convention for voters to have a say on major changes to voting systems.

In just one week our petition against Labour’s plan to disenfranchise local voters has gathered 5,800 signatures. Jordan has also appeared on Māori TV to discuss the issue.

On Tuesday night, your humble Taxpayers’ Union broke the story that Green MP Ricardo Menéndez March (who was noticeably absent from Parliament) is in managed isolation having returned from a summer trip to Mexico.

After we tipped off journalists they were able to verify the report with the Green Party.

The situation has become a major news story, and rightly so. Mr Menéndez March’s travel contravened official advice, MIQ spots are hotly contested by expats desperate to come home, and yet the MP sought special treatment by applying for an earlier emergency slot. And he continues to be paid handsomely by taxpayers, despite being unable to fulfill his duties.

This saga is a reminder of the extraordinary privilege of our politicians. How many Kiwis could get a new highly-paid job and then immediately abandon it for two months, on full pay, to take a trip overseas during a global pandemic?

Many New Zealanders will have sympathy for Mr Menéndez March’s desire to visit a sick relative. But they will have far less sympathy for his failure to front up to taxpayers about his absence, even while his Parliamentary colleagues returned to work beside his empty chair. He should have fronted up before we caught him out, not after.

The Auditor-General has delivered a shot across Grant Robertson’s bow, warning him that more transparency and regular reporting is needed for his COVID-19 spending.

We agree. The $62 billion COVID-19 response has seen money allocated to some bizarre projects. There was $50,000 given to an artist to make an “indigenised hypno-soundscape”, $72 million spent on horse tracks, and $300 million given to a handful of lucky tourism businesses, such as AJ Hackett Bungy.

This ad hoc, politically-motivated spending is a recipe for waste and exactly why the Taxpayers’ Union has promoted an economic response driven by tax relief.

When taxpayer money is handed out based on a someone’s ability to fill out an application form, rather than actual need, it’s not just wasteful – it’s unfair and potentially destructive. Businesses risk being pushed out of business by competitors receiving government support. The Auditor-General should speak to some of the businesses that are now struggling even more as a result of the Government’s COVID-19 response.

A new taxpayer-funded Ministerial Advisory Board has been set up to fix the organisational culture at the children’s ministry, Oranga Tamariki.

When Jordan suggested this was unbecoming of someone in a high-profile taxpayer-funded position, Mr Tukaki flipped out with a string of incoherent late-night tweets (some now deleted), and accusing us in the media of a “tirade of abuse against people of colour”.

There is a long tradition of our public service being politically neutral.  Unless we want American-style attack politics, that’s a principle worth fighting for. That’s why we’re publicly calling Mr Tukaki out.

The Minister who appointed him, Kelvin Davis, should seriously consider a sacking.

Diplomacy 101: A helpful and not at all patronising guide for our Australian friends

After Trade Minister Damien O’Connor told Australia to “show respect” to China, we were delighted to get our hands on his private key messages:

You can read the full (satirical) piece here.

Thanks for everything you do,