This was delivered at yesterday’s party conference and these are the significant statements, the full speech can be read here: 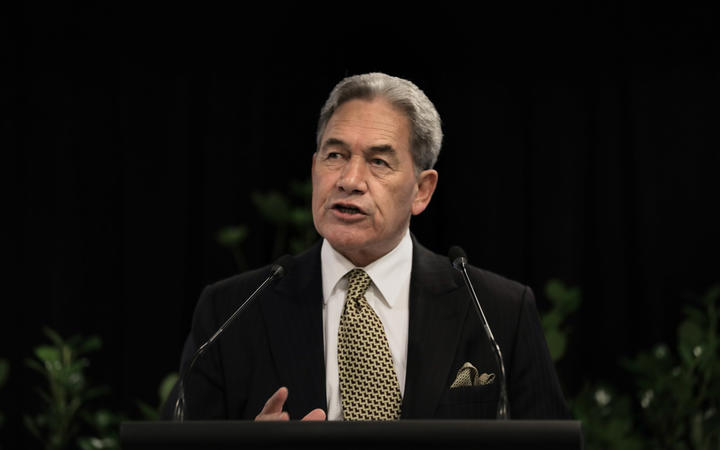 Ladies and gentlemen, it’s a pleasure to be in Auckland for the 28th New Zealand First Party Conference.

And we do not intend to put the name ‘New Zealand’ on the endangered species list.

You may recall a few years ago, that Sir John Key decided vainly, that he wanted to change the New Zealand flag.

That same flag that so many New Zealanders of European, Maori and other backgrounds had fought and died for.

You will recall New Zealanders said NO.

In a fit of pique several years later, Sir John said that he should have changed the flag and let the public love it or lump it.

That same sentiment from on high is present today.

It comes from a haughty autocracy that says we know best which is why you are being told to change your country’s name to Aotearoa without any reference to you or the cost of remarketing the name of a nation known worldwide.

Their choice is for a name that historian King pointed out many years ago, was never the name for New Zealand.

So why for example has the NZTA become Waka Kotahi — and when was the last time a government initiative used an English name that, heaven forbid, way over 90 percent of the population might understand?

The recent report by He Pou a Rangi, or the Climate Change Commission, is just one more example. It produced, wait for it, Ināia tonu nei: a low emissions future for Aotearoa.

Aotearoa appears in the report 1307 times.

So why without any reference to you the democratic masters of your nation’s future has a new ‘name change cult‘ suddenly appeared with this name in so many interviews, articles and adverts.

Who signed off on this plan to replace New Zealand’s name?

More importantly, when were you asked to approve this?

This is straight out of Sir John’s flag change playbook.

Don’t give the public a say, but just as Labour did, not campaign on removing the public’s right of veto over Maori wards, just go right ahead post-election.

Just as the Government said “no new taxes” and then post-election upped the Brightline test.

Just as they now are whacking tradies and farmers with a fee to make it cheaper for ‘Ngāti-woke’ to buy an electric car.

In the last two weeks in Auckland we’ve seen wholesale breaches of the law.

First, the Auckland Harbour bridge closed down without notice for an hour and a half while cyclists ignored the police and 99 percent of the motoring public and went ahead and brought the bridge to a standstill anyway.

It didn’t matter what reason motorists were trying to use the bridge that day.

And two days ago, the streets of Grey Lynn Auckland were blocked by hundreds of patched bikie gang members gathering for a funeral procession.

The police blocked Gt North Rd, a major route through central Auckland and the air was filled with smoke and the smell of burning rubber from bikie burnouts.

In effect the police stood by.

Ladies and gentlemen, it was NZ First who in the last three years drove new recruitment police numbers up an extra 2335 members.

We did not strive for extra police numbers to enforce law and order just to see this outcome. Today the political situation, on the surface, is very much a status quo carry over from the election. Labour has just delivered a budget for its base.

The political media can’t get past ‘the meta-narrative’ of a dominant PM versus a beleaguered Collins.

They perpetuate a flawed view of our economic performance.

Future taxpayers are going to pay well into this decade. and the next, for the debt daily being racked up.

Productivity continues to be anaemic, and we remain a narrow-based economy with significant hidden unemployment, homelessness, and despair, especially in Wellington and Auckland.

New Zealand’s GDP figures came out three days ago and the economic commentary was truly alarming. Hardly one economist looked at the big picture and asked: but how does New Zealand compare with say, similar size country performance, like Singapore or Finland, or where do we stand now compared to say, the 1950s and 1960s when we were a world economic performance leader. Who asked, but what is the state of New Zealand’s income per person?

Or of our former greatness when we had such low inequality?

Why is it we cannot afford to fund our decrepit health system?

We know medical staff are not the problem and that our inferior economic performance is. So much was promised and so little has been achieved in the Govenrment’s response to mental health. New Zealand is not making enough to spend enough on critical social infrastructure. We’ve lost our ‘Rich Nation’ status.

And we have lost so much of our social cohesion whilst our leadership boasts of how well we’re doing.

And what of our former claim to be a world leader “high property-owning democracy’. For a growing number of New Zealanders their future is a worsening daily struggle to just get by with soaring living costs.

This Government is enabling a wave of rights-based activism in-and-outside of government.

When was the last time you heard anybody stand up and talk about the responsibilities of citizenship? Everything in 2021 is now rights-based, or indigenous rights demanding co-governance, or the climate strikers demanding the right to be taught more of their obsession in their curriculum. The pendulum has swung sharply since the election, beginning with Ihumatao. At Ihumatao hundreds of new houses have been stopped with a so-called settlement that none of you have heard of and which won’t see the light of day in the next five years.

And in 2019 a report called ‘He Puapua’ came to Government but was never shown to one NZ First Cabinet Minister.

This report was deliberately suppressed.

In short, this report is a recipe for Maori separatism, they knew it and that’s why they suppressed it till after the election in the full knowledge that NZ First is for one flag, one country, one law. It was a gesture of ingratitude and bad faith.

Growing in our country is a ‘cancel culture’ where anyone who asks legitimate questions is belittled as a colonialist, a racist, a bigot, a chauvinist, or worse still, ‘not new wokeage’. Ladies and Gentlemen. We are not challenging the Prime Ministers good intentions and her crisis leadership. In Government we backed it.

But on countless occasions we challenged that they had few plans on delivery. You’ve heard of KiwiBuild, Labour’s flagship policy.

So, of the 40,000 that should have been built by now how come less than a 1000 have been. You’ve heard of light rail announced to cost $1.7 billion with a tender process, that since the election the Auditor General said was illegal, and where the costs, as we said, have blown out towards $15 billion.

Look at Auckland. The ‘City of Sails’ has become the City of Snails, with hundreds of businesses being caused economic ruin.

The hurdles the light rail project that Auckland faces are insurmountable whilst viable economic alternatives are staring in our faces.

And then there’s the new bridge to nowhere, with an appalling cost to benefit ratio announced before any valid costings were prepared, and which shamed by public embarrassment, even the Greens now say they don’t want.

Meanwhile settlements urgently needing their bridges to be repaired have just been ignored. But it doesn’t rain, it storms.

That’s an over $20,000 difference against a good model petrol or diesel alternative. And the question to Government is, how many working class people, regardless of their ethnic background are going to be able to afford your EV alternative?

And whilst we’re at it, what will happen to the old EV batteries?

Are they going to be shipped back to their country of origin or are we going to dump them in New Zealand?

And for the Greens, the question is, what thought have you given to the hard worker in the Congo extracting cobalt to finance your preference, or don’t they matter?

Again on working people affordable EVs and what to do with their old batteries, viable options are staring them in the face. And again they missed it.

When New Zealand First chose to go in to the 2017 coalition we did so to make great changes. We had four Ministers and an Under Secretary.

We held firm to get things done and be a handbrake on things that should not be done. We all know that a car with no brakes is highly dangerous vehicle.

We take pride in so many projects that we, and we alone drove to success, even though this Government is claiming it as their work – like a new Scott Base, like restoring the East Side railway workshops in Dunedin, like the biggest mussel farm in the world at Opotiki, and hundreds more. In April the NZ Herald had a headline ‘SMEs lap up interest-free loan scheme’.

It pointed out that more than 100,000 businesses have grabbed hold of this lifeline far exceeding the alternative plan to use the loan scheme offered by the banks.

Both the Small Business Cashflow loan scheme and the Business Finance Loan Scheme were kicked off last year to help business disruption through COVID lockdowns and to encourage banks to keep lending.

The contrast between these two schemes is staggering.

In contrast, the Small Business Cash Flow Scheme had over 105,000 successful applicants and lent $1.7b.

The successful scheme was the brainchild of New Zealand First.

The Business Finance Guarantee Scheme by the banks was Labour’s scheme. In the 2020 election Labour campaigned on our scheme being their own.

All four NZ First Ministers, Tracey, Ron and Shane and the Under Secretary, Fletcher and the full Caucus which includes Darroch, Clayton, Mark and Jenny did a sterling job of which every member of NZ First can be proud.

Meanwhile how many Labour Ministers came and went in that three-year period?

On so many issues we have raised the roof when others wouldn’t raise a finger. Our mantra is for unity, not division. For cohesion, not separatism. For government, not parallel or co-government. We believe that in NZ we are all equal.

That government is there, regardless of gender or race, to provide its people with security, freedom and equality because they have been trained to be secure, free and equal.

That way we will all be free to choose our future because we have been given the tools to do so. We are against extremism from wherever it may come, the Right or the Left.

Our beliefs are in our name, New Zealand First.

It goes without saying that without the moderating influence of Winston Peters, the Jacinda government has shifted Hard Left since last October, and although Jacinda wanted the two Green Party leaders as ministers so they could be scapegoats for the things she knew her government had and would perform worst in, the big problem for her party and the country is that she embraced most of the Greens’ extremism which clearly doesn’t sit well with the centre ground represented by Winston Peters, and that may well go to National next election.  —Eds