Sources close to Jacinda Ardern have made a controlled leak to The Woke Examiner to put to bed the rumours swirling uncontrollably around our world-leading leader’s wedding.

Due to pressure from Netflix, who are making a docudrama about the whole affair, the wedding will not be held in Aotearoa as nobody knows where that is anyway.

As Aotearoa will be locked down until late 2022 it would make this major world event impossible.

Jacinda Ardern has such high standing as the world’s number one leader that her wedding venue needs to match her importance.

Initially, it was thought the UK was the ideal location with Buckingham Palace being the venue. Unfortunately, the palace is not available as the Queen will be washing her hair on the required day so the Sydney Opera House has been booked instead.

Sydney’s airport is more suited to handling the huge influx of mega-rich elites expected to fly in aboard their private jets. Anybody who is anybody has been invited and will be there.

A phalanx of 10,000 Maori warriors will paddle off shortly to Sydney in waka to arrive in time for the wedding where they will welcome the bridal couple up the steps of the Opera House with a rousing haka.

1,000 accompanying wahine will break into a soulful karakia as the couple enter the interior.

As the Pope will be busy exorcising cardinals and choirboys until after Christmas another marriage celebrant is being sought. The Archbishop of Canterbury and the Grand Mufti of Jerusalem are in the running. 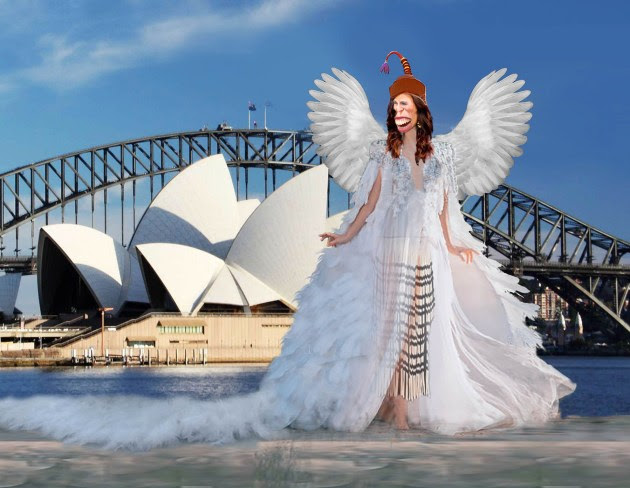 A sneak preview of the wedding dress and matching hat.  Photoshopped image credit HangonaMin. The BFD.

The flax and silk wedding dress designed by Dr Seuss has been skilfully woven by ancient Kuias steeped in tikanga while the bridal train measuring 12 metres will feature thousands of feathers from kotuku (white heron). A matching hat has been designed by Bill Gates’ mother-in-law.

Helen Clark will be Gayford’s best man and will ensure he does actually get to the altar.

Of course, Neve will be a flower girl along with six or seven others picked at random from the general population by Clarke Gayford.

He will use his culinary expertise to oversee the internationally famous chef, Gordon Ramsay, with the preparation of the wedding feast.

The other Gordon, Peter – world-famous chef in Aotearoa – will assist with his signature shrimp cocktail for starters.

Sydney will echo to the sound of jackhammers creating a series of hangi pits.

The Ureweras are being scoured for the thousands of wild pigs needed for the feast. Also, Clarke Gayford will personally catch and skin whole schools of kingfish for the pot.

More information will be published as it comes to hand.