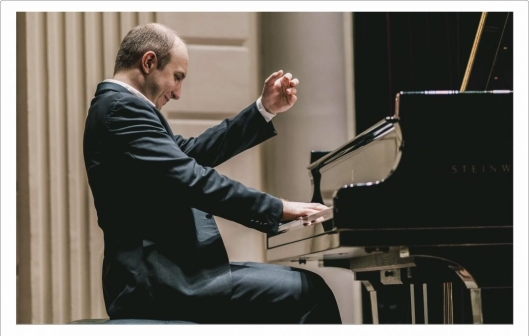 It is a not-to-be-missed celebrity recital from the stunningly virtuosic Ukrainian pianist Alexander Gavrylyuk, making his third visit to Waikanae.
This is his only solo recital in New Zealand so tickets will be in hot demand.
Gavrylyuk’s international profile is steadily rising, especially since he launched his 2017/18 season with a BBC Proms performance of Rachmaninov’s Third Piano Concerto, described as “revelatory” by The Times and “electrifying” by Limelight magazine. Similarly acclaimed performances have followed, including with the Royal Concertgebouw Orchestra, Tokyo Symphony, Czech Philharmonic, the Hallé Orchestra and the BBC Philharmonic.
Born in Ukraine in 1984, Alexander won First Prize and Gold Medal at the Horowitz International Piano Competition in 1999, followed by First Prize at the Hamamatsu International Competition and the coveted Gold Medal at the Arthur Rubinstein Competition. In 2009 he made an acclaimed recording of the complete Prokofiev Concertos with the Sydney Symphony under Vladimir Ashkenazy who described him as “a major talent”.
For his Waikanae recital he will play works by Mozart, Brahms, Liszt and Saint-Saens. The second part of the concert will be devoted to Mussorgsky’s masterpiece – Pictures at an Exhibition. The concert is in the Waikanae Memorial Hall at 2.30pm.
Tickets can be bought at Waikanae New World or Moby Dickens Books in Paraparaumu Beach, or through the society’s website www.waikanaemusic.org.nz
Enquiries are welcome on 04 905 6070 or 293 4025.