There is also a bill relating to medical marijuana before the NZ parliament. When we were in California we watched a county council meeting where one of the topics was a group applying for a permit to have a marijuana festival (which passed 5-4).

This is a great compendium of diseases for which medical cannabis can be beneficial. It’s insane that it’s not legal across the US, and that the federal government places it in most dangerous controlled substance category. From Dr. Joseph Mercola at lewrockwell.com: The marijuana plant contains more than 60 different cannabinoids; chemical compounds the human […]

It’s not clear if there will be door sales. The contact seems to be Averil Foote via Facebook.

1 September is widely regarded as the first day of Spring in this part of the World — fingers crossed for some weather to match!

Book 3 of 4 in the series. Mik Peryer has also published photographic books on the subject for all audiences, and his website has over 40,000 hits per month.

As Bernie Randall said in this post 2 years ago about that welcome sign, “Waikanae is the birds, the trees and the beach, too many residents, and his design features aspects of that.”

KCPS is pleased to announce “Through the Photographer’s Eye” – an exhibition of images created by its members. Starting on Monday 17 September with a members and guests only opening evening, the exhibition is open to the public from 18th September to 5th October inclusive.

The venue is Paraparaumu Library in Iver Trask Place off Rimu Road. Opening hours are:

‘Amid growing animosity between Anaheim and Walt Disney Co., the president of the media giant’s Disneyland Resort asked the city to end all tax incentive deals in hopes of promoting “cooperation and goodwill.”

‘The move marks an end to the way Disney has long done business in the home town of its original theme park, where a complex relationship has been dotted with subsidies, incentives, rebates and protections from future taxes that public policy experts estimated would be worth more than $1 billion. Disney, Anaheim’s largest employer and taxpayer, has disputed that estimate.’

You may wonder why — these following sentences in this L.A. Times article make the reason clear:

‘By eliminating certain tax agreements, Disney may be ensuring that it isn’t affected by a Nov. 6 ballot measure that, if passed, would require the resort to pay all its workers a living wage as it would require large hospitality businesses that accept a city tax subsidy to do so.

‘The ballot measure calls for an immediate salary increase to a minimum of $15 an hour, with a $1 hourly increase each Jan. 1 until 2022. If the measure applies to Disneyland Resort, it would mean the pay raise would apply to all 30,000 resort employees who earn less than $15 an hour [about $NZ 22 an hour at the present exchange rate].’

You may wonder why what must be the biggest visitor attraction in California needs tax breaks in the first place.

You may also wonder why a corporation that pays its bosses massive salaries a year can’t afford to pay a living wage to its front line workers.  Oh wait, there is another organisation we all know very close to home that does that, isn’t there?

Another connection with the local scene is the Kapiti Coast District Council’s notions about “economic development” which featured in the Long Term Plan document.  It has already given Air Chathams a $50,000 subsidy for this year and the next two; but that amount is tiny compared with the multiple millions it has slated in the LTP to be dished out every year.

Are there obvious cons in top local bureaucrats and councilors deciding what enterprises should be given tax breaks and/or subsidies at everyone else’s expense?

Would the councilors put any economic justice conditions on subsidies if they don’t care about injustice in their own organisation?

Should there not be a level playing [operating] field from government when it comes to businesses of all kinds?

Will businesses which don’t receive such privileges from the council feel rightly peeved about it?  Would they justifiably be motivated to close up their Kapiti operation and go elsewhere?

We leave the answers to you, dear readers. 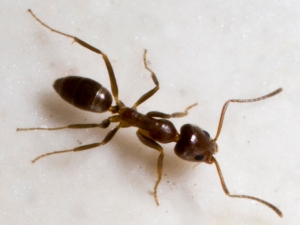 Another post from the Spotlight on Paraparaumu and Raumati FB page says that the Raumati South Residents Association has successfully trialed a low-cost homemade borax-based bait to remove Argentine ants.

These ants are known to be in Waikanae also.

“It is now the end of winter and ants have largely become dormant, but will soon dramatically increase in numbers when the warmer weather arrives. RSRA member Jenny Scott believes it is feasible to reduce ant infestation to about 20% of the [pre-bait] population once baiting is commenced, but this will require a commitment from the community to coordinate baiting, and from Councils and Community groups to keep the public informed and motivated.”

Jenny Scott has also written to the Mayor, outlining the work of the Raumati South Residents’ Association and options for ant control, stating that a district wide campaign may be possible.

This letter is available to read here (6-page pdf).  An extract:-

Fortunately, all ants, are susceptible to slow acting borax baits. These are available commercially or can be made at home. Borax in small quantities is safe for humans and animals, and very cheap. But it is toxic to bees and all other invertebrates, and to fish.

Making bee-proof ant baits may be cheap and easy, but it is also very time-consuming, needs to be maintained over several weeks, and may contribute to plastic pollution. To make the bait stations we ordered small pill capsules from our local chemist at 7c each, and encouraged householders to save them carefully for re-use. These capsules had to have holes drilled in the lids, something which most households could manage themselves. But a proportion of the population will need help with this.

Borax is also effective for cockroach infestation, but would require different dispensers.

For those heading to or from the southern neighbour on Saturday.  The Kapiti Coast Derby Collective’s logo has an obvious influence from the AC/DC one, although of course KCDC are also the initials of the organisation everyone knows about.

MenzShed Kapiti invites you to come to their Open Day for a sausage [hopefully, there’ll be something also for the vegans  🙂 ] and cup of tea on Saturday 1 September from 10.00 a.m. to 1.00 p.m. to see what’s happening there and to launch the fund-raising for new buildings at 24a Rangihiroa Street in Waikanae Beach.

There’ll be a sale of products made by members, plants, surplus tools and equipment and a chance to see how this amazing group operates. There will also be a display of their past and current projects, and the details of the planned new building.

MenzShed Kapiti is open two mornings a week and members participate in activities that support the Kapiti community. They regularly have 50 or more men there for the morning and are bursting at the seams in their present buildings. They have made do with limited facilities for the past 8 years and now need to fund-raise.

After 2 years of planning, Resource Consent procedure, and engineering design, a Building Consent has been issued and they are ready to start building new kitchen, toilet, and meeting facilities as well as additional workshop space.

Member Nigel Clough says, “Our aim is to make our MenzShed the place to be on the Kapiti Coast [presumably for men anyway] – providing a fantastic contribution to the community. We are asking our community to help us make that happen.

“The [new building] project is estimated to cost $320,000. We have made a good start and are fundraising for the balance. We’ll tell you more about how you can help on 1 September”.

MenzShed Kapiti is a Registered Charitable entity so donations of $5 or more to the building fund will allow individuals to claim a donation tax credit.