The two graphs below from the Greater Wellington Regional Council website show that rainfall recorded at the Waikanae water treatment site in the 3 months ended today has been 182 mm, against 93 mm for the same period last year. In 2014 the figure was almost exactly the same as this year, 191 mm.

“[Michael Scott]’s developed a new strategy which included a land swap with a purpose-built supermarket with underground parking on the large council-owned carpark next to a realigned Marae Lane.

“It would enable the current Countdown supermarket site to be opened up for other uses as well as creation of a new single level Waikanae Library next to it.

“Council needed to lead the way in the land swap and all the major players especially council, Progressive Enterprises and Manchester Unity needed to work together for the future good of the town centre, he said.

“Other commercial players would need to have a role in the process too.”

The reporting doesn’t give the details necessary to understand exactly what Cr Scott has in mind.

But one thing which is obvious is that the Mahara Gallery expansion (one story upwards) is not going to happen because the gallery has only raised (as at 29 February) $933,000 of the $5.3 million it needs to.

Does Countdown (shaded orange in the pic above) want to change anything?  We have the strong suspicion that it wants to move to the beach closer to where the Expressway off-ramps will be. But Cr Michael Scott has told us directly that it has too much invested in its existing building. Beach residents are unhappy about the idea of a supermarket west of the Expressway, too.

What is so much better about a one-story library than a two story one (the library is shaded magenta)?  If you want more natural light you can put Solatubes in the roof — website

“We need to open up the northern end of Mahara Place.” Why? There’s a big carpark plus a small park there.

Underground car park  — hmm, almost certainly that would be a user-pays one.  Waikanae is not Wellington.

“The council’s current proposals were simply papering over fundamental cracks”.  Yes, but is more than that warranted?

As has been made clear multiple times, not just by us, the existing town centre is going to experience a big loss of business because of the Expressway in a year from now, so is lots of spending by the council justified when things we really need — the dam and the railway underpass — are far more important?

In regard to (1), why should the closure of one supermarket affect the other’s viability?  Surely the opposite is true? New World is unlikely to go, but Countdown (Woolworths)’s building is old and unexciting.  If they departed wouldn’t that provide the space for Michael Scott’s new single level library and the Mahara Gallery could move into the library?

In regard to (2), yes, KCDC boss Mr Dougherty has spent huge amounts of ratepayers’ money on his consultants which included the ridiculous Ngaio Road development notion.  It’s time for Dougherty to be reigned in. 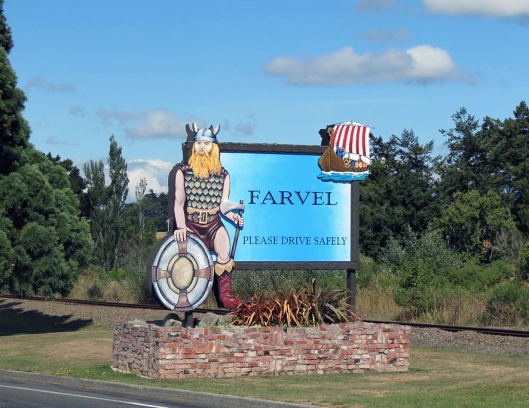 Regardless of what sign the WCB chose, there has been the option of putting something fitting on the back of it, with a simple message saying ‘farewell’

The SH2 welcome signs in Dannevirke say Farvel on the reverse sides which is the Danish/Norwegian spelling of Farewell, plus a road safety message.  (The Scandinavian spelling of Welcome — Velkommen — would be comprehensible to English speakers, too).

If the WCB goes ahead with the fence/pipe organ design, then another plaque saying ‘farewell’, perhaps with the Maori ‘hei kona ra’, on the other side would be a minor and worthwhile addition. 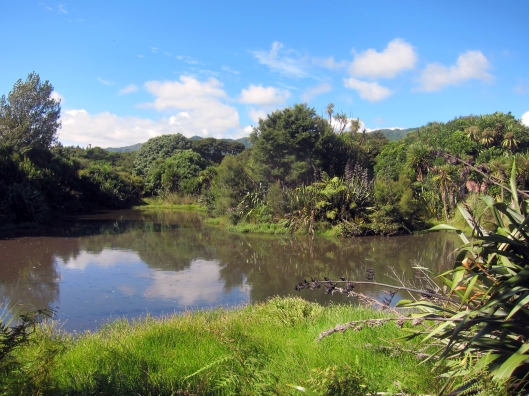 Plans to merge Wellington and Porirua into one city have been put on ice amid fears the public would not get a say in the matter.

Wellington city councillors voted on Wednesday to let the matter lie until new laws have been passed by Parliament later this year making it easier for councils to merge if they so wish.

That means any talk of a merger will not be back on the Wellington City Council table until after the October local body elections.

Porirua approached Wellington with the idea after plans to combine the Wellington region’s nine councils into a super-city were scrapped in June 2015 due to a lack of public support.

Investigating the impact on rates will be a major part of the work. But indicative figures presented to councillors earlier this month by chief executive Kevin Lavery suggested a merger would see Wellington’s rates rise by 3.2 per cent and Porirua’s drop 16.1 per cent.

The last sentence above should make clear the reason why the Porirua Council came up with the proposal!  It should also give the likely outcome of a referendum, considering that Wellington is 3 times bigger!

Frankly, we think the costs to all ratepayers would be such to ensure rates for all would go up and services reduced. For further arguments against the ‘mega-council’ notion, see the posts on the subject from last year.

The death of a silver fern in our garden last month indeed proved an accurate omen for the national flag referendum. Not that the result was a surprise, based on opinion poll results.

So for a while longer, Kiwis and Aussies will experience each other’s flags being confused by those from other countries.

John Key spearheaded the change campaign, which the opposition parties chose to politicize. The main argument advanced by those opposing the change was that the government was spending $26 million on the process.  In fact, about $18 million of this was money given to NZ Post, which of course, is government-owned, so the net cost was really $8 million, and it wouldn’t be at all difficult to name numerous things on which the central government has wasted much more.

Next to complaints about the cost, the second most commonly heard argument was that it was the flag flying when NZ soldiers went to WW1 and WW2. Well, in both wars NZ joined in to support the mother country, so was the aspect they really wanted the Union Jack?

The Union Jack itself was severely threatened in 2014 by the Scottish independence referendum.  But supporters of the status quo breathed a sigh of relief when that narrowly failed.

A more interesting argument we’ve heard is that the crosses in the Union Jack denote Christian Heritage (the St Andrew’s X is now considered the more likely shape that Christ was crucified on, rather than the traditional shape) which is under threat from mass Muslim immigration.

Anyway the existing flag is going to be around for at least a decade longer, but the 43% support for change is enough to keep the issue alive.

This is a denuded ca. 1.8 metre high conifer tree stump in our garden which was simply getting too big so it needed to go.  But instead of cutting if off at ground level, we left it like this and put some artificial foliage over the top of it.

If the idea of that sign is to represent living trees rather than ones which have been given property developer treatment, then here’s a proposal for you, WCB members.

Their logo is appropriate, it seems.

These are relevant to both the concern about developments generally on the beach side of the forthcoming Expressway (see the last page below), and specifically to the huge Maypole company development there (all the area shaded pink-red in the second page and some more), information about which has been frustratingly difficult to obtain.  However, a post on what we have been able to establish so far is imminent.