This Part 2 is about the reality of one of the biggest scientific frauds the World has ever seen.

That’s a pretty scary heading. The account comes from Peter Spielman and is dated June 1989 – yes, 1989. Here’s some of what the UN said:

A senior UN environmental official says entire nations could be wiped off the face of the Earth by rising sea levels if the global warming trend is not reversed by the year 2000. Coastal flooding and crop failures would create an exodus of eco refugees threatening political chaos said Noel Brown, director of the New York office of the UN Environmental Programme or UNEP.  He said governments had a ten year window of opportunity to solve the greenhouse effect before it goes beyond human control, (that’s by the year 2000).

According to Brown as the warming melts polar icecaps –

The UN then formed the IPCC, (Intergovernmental Panel on Climate Change), which became its mouthpiece.  The IPCC predicted 50 million would be displaced by rising sea levels by 2015. When this didn’t happen they then predicted the same for 2020. At one stage they said all Pacific Islanders would have to move to NZ.

Did any of this happen? – NO, of course it didn’t. It was a load of scaremongering rubbish. You would think that members of the public reading this would begin to wonder about the integrity of reports put out by the UN — the Instigator of the climate scare. (We have just had the 2021 report).

But no, most New Zealanders still believe what the Government says that there is a crisis and we have to buy electric vehicles, put up wind farms and solar farms, and all sorts of other measures to reverse the greenhouse effect.

Be sure you have read Part 1 before proceeding (see here). In that I indicated that there is growing evidence that CO2 emissions particularly from the oceans, follow global temperature increases. Many honest scientists subscribe to this now and there is plenty of evidence to support this.  Humans are accused of putting CO2 into the air and this is causing global warming. In fact the warming comes first, then the release of CO2.  Ice core samples show us that the warming precedes the release of CO2 by between 800 and 1000 years.

Increases in concentrations of CO2 do not appear to increase air temperature.

In 1900 Knut Angstrom, a Swedish physicist, specialising in the absorption of solar radiation by the Earth’s atmosphere showed by experiment that increases in concentrations of CO2 do not appear to increase air temperature. In fact we know now that the heating effect of CO2 falls off logarithmically as the concentration of CO2  increases.

Greenhouse gases absorb only certain limited bands of frequencies of radiation emitted by Earth. Those are the black spikes shown in the graph below. They are not to scale.  The temperature at the Earth’s surface is the result of the continuum of the broad range of oscillations shown in green.

Then Angstrom went on to show that CO2 absorbs LESS THAN 16% of the frequencies radiated by the Earth. (Note that infra-red radiation, (heat), like light, consists of a number of frequencies of vibration.)

Meanwhile also in 1900, Max Planck showed that a body of matter (that’s the CO2 in the atmosphere), can only be warmed if it absorbs 100% of all the frequencies radiated by the warmer body. Thus if 16% of the frequencies radiated by the Earth and absorbed by the CO2 were re-radiated and then absorbed by matter-the Earth, they could not warm that matter.  A body cannot be heated by its own radiation.  So the Earth will not warm. Absorbing only 16% of the frequencies emitted by Earth cannot have much effect on the temperature of anything.

It has never been shown by experiment that greenhouse gases absorbing infra-red energy (heat), can physically cause observed warming. Experiments described on the internet that claim to show greenhouse warming, use heat sources thousands of degrees hotter than Earth. Scientist Dr Peter Langdon Ward has shown in the laboratory using an appropriate heat source that air containing more than 20 times normal concentrations of CO2 is not warmed any more than a similar volume of normal air under identical conditions.

Dr Ward goes on to suggest that depletion of the ozone layer contributes to global warming. Depletion means more sunlight reaches the Earth’s surface and so there is more warming. He states that the ozone layer was depleted by 70% from 1970 to 1998.

Some of the dirty tricks

•    The Obama administration faked global temperature data to fit warming. The data actually showed that we were in a cooling trend but NASA and NOAA scientists were told to deliberately alter a graph that showed cooling, to one that showed warming, in a politically motivated attempt to rewrite history and claim global warming is causing US temperatures to trend upwards.  Below are the graphs.

After the Obama administration took office and started pushing the global warming narrative for political purposes NASA was directed to alter its historic data in order to reverse the cooling trend and show a warming trend instead. This was accomplished using modelling computers that simply fabricated the data the researchers wished to see instead of what was actually happening in the real world. 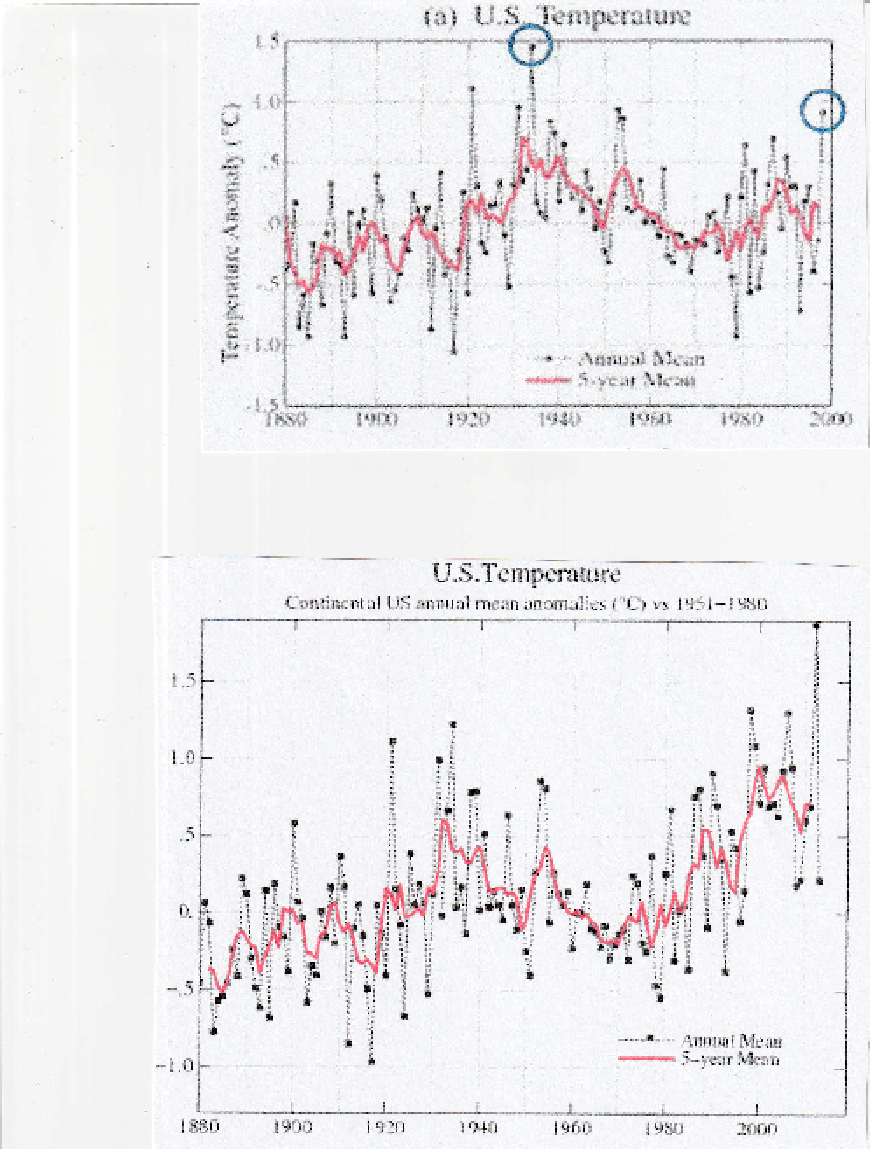 The new altered chart shows that historical data – especially the severe heat and droughts experienced in the 1930’s – are now systematically suppressed to make them appear cooler than they really were. At the same time, temperature data from the 1970’s to 2010 are strongly exaggerated to make them appear warmer than they really are. This is a clear case of scientific fraud carried out on a grand scale in order to deceive the whole world about global warming. This is one of probably several  cases of fraudulent data of which the Mann hockey stick is the best example.

•  Naomi Seibt is the non-believers answer to Greta Thunberg. She is a young 19 year old German.  She has produced several videos on climate, which oppose the views of the German party line.  German officials have fined her and demanded costs on the grounds that she has dared to question the party line.  There has been a prosecution and conviction without trial and she has had her earnings cut off. She has been fined $400 plus costs.

•  Peter Ridd, a physicist who has been critical of science linking climate change (anthropogenic global warming), and polluted water to coral bleaching on the Great Barrier Reef was sacked from James Cook University in Queensland because he went against the popular views of his colleagues. He stated that bodies like the Australian Institute of  Marine Science, could no longer be trusted.

Note: I have been in touch by E-mail with Clifford Ollier of the University of Western Australia in Perth. He says the following:  “There is a completely fake argument used by alarmists including NASA, implying that coral reef bleaching is caused by CO2. Bleached coral is perfectly normal and occurs when wave driven mixing ceases during periods of extended calm associated with unusual warming of the surface 1-2 m of sea water. The reef recovers in a few years by recolonisation.”

The Washington Times had the headline in 2019: “Susan Crockford fired after finding polar bears thriving despite climate change.” Nobody has done more to sink the claim that climate change is endangering polar bears than zoologist Susan Crockford.  After 15 years as an adjunct assistant professor Ms Crockford said the University of Victoria (Canada), rejected her renewal application despite her high profile as a speaker and author stemming from her widely cited research on polar bears. Ms Crockford accused officials at the Canadian University of bowing to “outside pressure,” the result of her research showing that polar bear populations are stable and even thriving, not plummeting as a result of shrinking Arctic sea ice, defying claims of the climate change movement.   Her dismissal has spurred alarm over the implications for academic freedom.

Note: Polar bears were not decreasing in numbers because of climate but because they were being hunted and shot.  Hunting them was then banned and numbers have dramatically increased.

These are only a few examples of victimisation of those honest scientists who dared to go against the so called “consensus.”  The list is almost endless.

Some in Washington want to unleash government to harass heretics who don’t accept the “consensus.”   Galileo was tried in 1633 for spreading the heretical view that the Earth orbits the sun, convicted by the Roman Catholic inquisition, and remained under house arrest until death. Today’s inquisitors seek their quarry’s imprisonment and financial ruin. The climate alarmists are increasingly focused on punishing dissent from their views.

In 2009 and in 2011 thousands of E-mails were leaked from the climate research unit at the University of East Anglia. These E-mails came from scientists central to the assertion that humans are causing a global warming crisis. Three themes emerged from the newly released E-mails.

E-mails between “Climategate” scientists show a concerted effort to hide rather than disseminate underlying evidence and procedures. Tom Wigley, a scientist  at the University Corporation for Atmospheric Research, authored a Climategate E-mail asserting that his fellow Climategate scientists “must get rid of” the editor for a peer reviewed science journal because he published some papers contradicting assertions of a global warming crisis.

31,500 American scientists signed the petition. Here’s what they said: “We urge the US government to reject the global warming  agreement that was written in Kyoto, Japan in Dec 1997 and any other similar proposals. The proposed limits on greenhouse gases would harm the environment, hinder the advance of science and technology and damage the health and welfare of mankind.”

“There is no convincing scientific evidence that human release of CO2, methane or any other greenhouse gas  is causing or will in the foreseeable future, cause catastrophic heating of the Earth’s atmosphere and disruption of the earth’s climate. Moreover there is substantial scientific evidence that increases in the atmospheric CO2 produce many beneficial effects upon the natural plant and animal environments of the Earth.”

Furthermore, 90 Italian scientists reject global warming in a petition to Italian leaders. The scientists told the leaders that CO2’s impact on climate was unjustifiably exaggerated and catastrophic predictions were not realistic. “The anthropogenic origin of global warming is an unproven hypothesis, deduced from some climate models, that is complex computer programmes called general circulation models. On the contrary, the scientific literature has increasingly highlighted the existence of a natural climate variability that the models are not able to reproduce.  This natural variability explains a substantial part of global warming observed since 1850.”

The following is the most disgraceful thing I have read:

In the USA a group called ten–ten made and released a film. It featured children who didn’t believe in man-made global warming being blown up in an explosion by their teacher. It created so much public outrage that it was immediately withdrawn. It was an outrageous attempt to scare little kids that if they didn’t believe what they were told to believe, they would be killed.

The IPCC and the Nobel

In 2007 the IPCC was awarded as an organisation, the Nobel Peace Prize.(goodness knows why!). The boss of the IPCC Rajendra Pachauri, mistakenly wrote to IPCC affiliated academics telling them they were all Nobel Laureates.  This included Pachauri himself.  So whenever one of these academics was to give a lecture to the public, he or she was introduced as a Nobel Laureate. This gave them much increased status.

The organisation issued a statement: “ The prize was awarded to the IPCC as an organisation, and not to any individual associated with the IPCC. Thus it is incorrect to refer to any IPCC official, or scientist who worked on IPCC reports as a Nobel Laureate or Nobel Prize winner.”

Pachauri resigned from the IPCC in 2015 after allegations of sexual harassment against a staff member.

Where else have we been seeing relentless, unfounded scaremongering by unaccountable bureaucrats as a means of advancing their objectives? —Eds