Reproduced below is one of the present Kapiti mayor’s campaign advertisements from last year.

Like all his other promises from both 2016 and 2019, it has proved to be a case of “say something that sounds good to get elected, then ignore it when in office.”

In this case, however, not only has he done nothing to honor his promise, he has actually done the exact opposite.

Last November when Guy Burns of the Paraparaumu-Raumati Community Board proposed a list of areas of council roles where there could and should be devolution of power to the community boards, the Mayor’s response was a typically arrogant and snide rejection with the comment “this is a marathon, not a sprint.”  Or as Sir Humphrey Appleby of Yes, Minister would say, “In due course — in the fullness of time.”  In other words, forget about it.

In June at a council meeting he announced that community boards were being barred from councilor briefings.  How does preventing boards from having access to information empower them?

For elected members with this mayor it’s a case of: “all right you people, be nice and obsequious, smile and nod approval for the things the management put in front of you and you’ll have a pleasant trip.  You’ll get your photo ops, your excursions to events and conventions where you can socialise and be merry.” And of course, we well know what happens when instead they put up opposition.

About half the time of most Community Board meetings is spent on deciding to award small discretionary grants to people — often things like $500 for little Johnny to go to a gymnastics tournament out of town.  In Waikanae many parents are wealthy enough to pay for such themselves, but if it meets the criteria, who’s going to turn down free money?  There should be some central council committee that deals with this; Community Boards should spend their time listening to concerns, gathering evidence and deciding what needs to be done about them; then ensuring the agreed action takes place within a reasonable period.

One problem that the boards have in Kapiti is the automatic appointment of a Ward Councilor to them — that in my view isn’t a good idea. Councilors should have speaking rights, but the result with voting rights is that the Councilor dominates everything out of an inflated sense of prestige and the voting powers they have at the Council table which Community Board members do not have.

Additionally in my view, all Councilors should be District-wide (and fewer of them: 6 rather than 10 would be enough) — Wards should be for the Community Boards only. These changes can be promoted at the next representation review due next year. 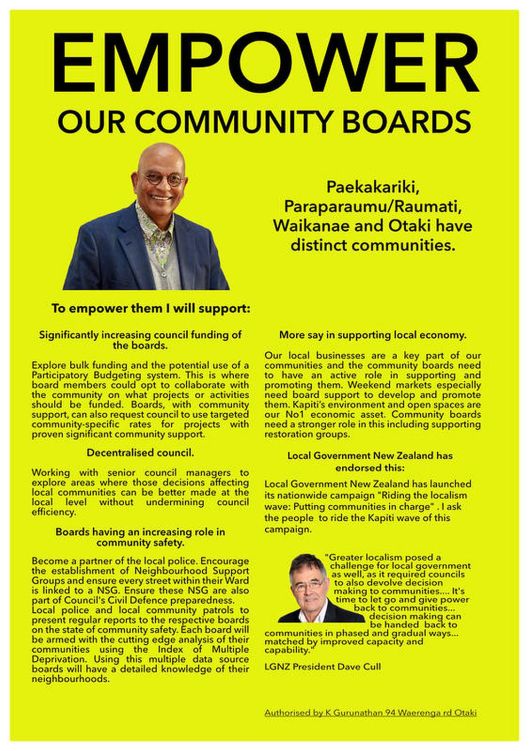 One of Mayor Gurunathan’s campaign ads last year — in practice he has done the exact opposite.

1 thought on “Localism in Kapiti stymied because of the Mayor”