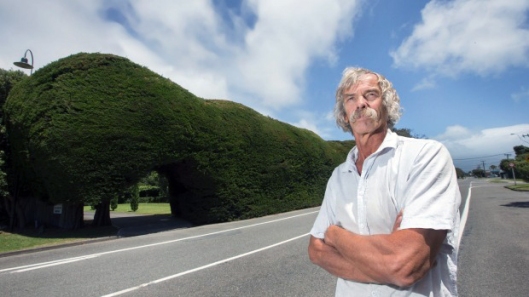 This article by Joel Maxwell on the stuff site deals with the dispute between the council and the Osborne family whose street frontage macrocarpa hedge has grown to the stage where it extends into the cycle lane, reducing the amount of room for cyclists and accordingly is causing concern for them and some neighbours.

There are, of course, two issues involved: safety and aesthetic appeal.  Which should take priority?  Our view is that safety should; but aesthetic appeal is important too, and trimming should be done in a way so as to preserve it as much as possible.

One of the problems with macrocarpa is that once you trim back past the green foliage to the brown part of the branches and twigs, the green won’t recover.  We know this because we have the same problem with a neighbour’s old tree growing over our driveway.  So far we’ve been tolerant, but have made clear to the owner that we are going to have to remove the obstruction this year, and have suggested planting a more suitable tree in its place.

The Google Streetview is below; this enables you to view it from several angles by clicking in the arrows.