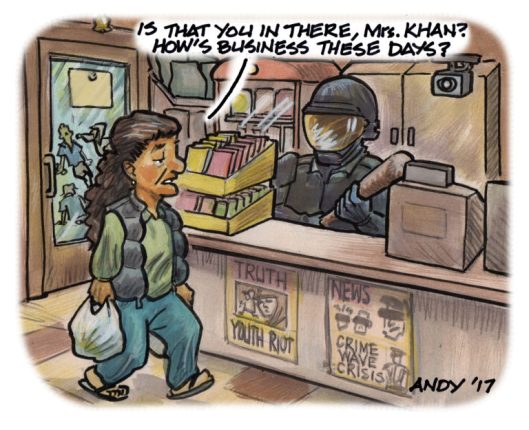 Last week the problem of juvenile delinquents routinely robbing dairies (or if you’re Australian, milkbars) in south Auckland — usually violently — was highlighted in the national media.  As well as cash, cigarettes and liquor are the main objectives.  It’s probable that most of these robbers are addicted to methamphetamine, which is now easier than ever to obtain.

The shop owners interviewed complained about the lack of police patrols, and as a result the offenders show no fear of being caught. The AM Show on Newshub (TV3) conducted a poll on whether dairy owners should carry guns — 46% of respondants said yes.

Fortunately, Waikanae is the opposite of south Auckland in terms of violence, but drug dealing and abuse is a definitely a problem in the town and the whole of Kapiti.

Being robbed is almost an occupational hazard for the small local grocer, so why not give them some of your custom to show that you care about them?