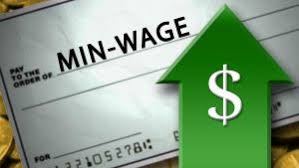 And without a big hike in rates: Wellington ratepayers have had a 3.3% increase, unlike the 6% Waikanae people have been hit with because of the KCDC.

As from yesterday the minimum Wellington City Council employees will get is $20.20 an hour, following Auckland City Council.  The national statutory minimum is $15.25 an hour.

In Australia the national minimum wage was also increased yesterday — to $18.29 (about $NZ 19) an hour.

Several cities in America likewise saw a minimum wage increase yesterday; for example Los Angeles has gone from $10.50 to $12 (about $NZ 16.40) an hour, in San Francisco even more: $14 an hour (about the equivalent as in Australia).

The response from Cr Elliott to an article on the Kapiti Independent News website makes clear that there are council workers below this level and there is no intention to change that.