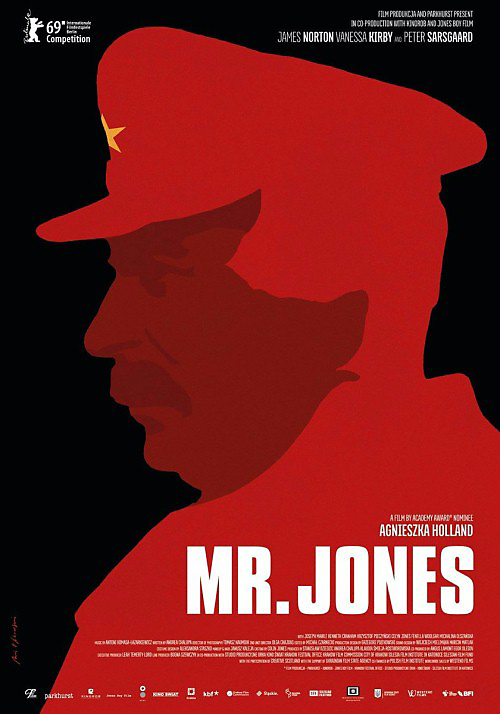 The theme of dictatorial government distorting or hiding the truth has become highly pertinent in NZ now and the subject of this movie, involving Jacinda’s avowed hard left ideology, made it one that we had to see at the Wellington International Film Festival.  Hopefully, it will get a wider release including at the Waikanae Shoreline.

Gareth Jones (13 August 1905–12 August 1935) was a Welsh journalist who first publicized in the Western world the existence of the Ukraine famine of 1932–33 created by Stalin to deal to millions of Ukranian peasants who resisted his collectivization of farms by getting rid of them — info.

Just prior to that, in late January and early February 1933, Jones was in Germany covering the accession to power of the Nazis and was in Leipzig on the day Adolf Hitler became Kanzler.  A few days later on 23 February in the Richthofen aeroplane, Jones became the first foreign journalist to fly with Hitler as he accompanied Hitler and Joseph Goebbels to Frankfurt where he reported for the Western Mail on the new Chancellor’s tumultuous reception in that city. He wrote that if the Richthofen had crashed the history of Europe would have changed.

The next month, he traveled to Moscow wanting to interview Stalin, but didn’t get to do so. He eluded authorities to visit Ukraine, where he kept diaries of the starvation he witnessed. On his return to Berlin on 29 March, he issued a press release which was published by many newspapers, including The Manchester Guardian and the New York Evening Post.

Nevertheless, Jones had a hard time with his reports. His camera was taken; Walter Duranty, a Liverpool-born Anglo-American journalist who served as the Moscow Bureau Chief of The New York Times from 1922 to 1936 called him a liar and even the British government didn’t want to risk lucrative economic relations with the USSR.

This 2-hour movie by veteran Polish director Agnieszka Holland focuses partly on the famine, presenting intimate and gruesome vistas, but looks more at Stalinist secrecy and propaganda, and the roles of Western media and politics that swept this massive atrocity under the rug for decades.

The movie portrays the luxurious and decadent lives of the elites (Western and Russian) in Moscow in stark contrast to the suffering of the peasants and brings us to the beginnings of worldwide propaganda and fake news strategies which are even bigger today.

Eric Blair, better known as George Orwell, is introduced to Jones and as most know, his novels Animal Farm and 1984 were thinly veiled allegories to Stalin and his Soviet Union.  But the methods of all totalitarian regimes are the same.

Some interpersonal relationships are included in the film, probably for extra spice and are speculation.

Gareth Jones wasn’t only banished from the Soviet Union following his reports, he was put on Stalin’s hit list and while in Mongolia in 1935 he was shot dead by an NKVD agent just one day short of his 30th birthday.