Joe Country by Mark Herron is the sixth in the series about inept washed-up spies, banished to Slough House, mostly to protect the reputation of MI5.

Jackson Lamb is their boss and shows no sign of refraining from his drinking, swearing, farting and dirty socks. The group of outsiders is as diverse as it is hilarious. They get into some horrific situations which terrify them and us.

Herron is one of England’s best writers. He doesn’t show any sign of running out of creative steam.

Start with Slow Horses and you will gallop through the other five in the series.

Another top thriller from the master

And then, of course, there is Jo Nesbo. How does he do it? Knife is Harry Hole’s 12th account of his dark detective experiences.

Be warned, this is a tale which will shock, grip and scare with its visceral, extremely violent and complex plot. There is a shocking early death combined with the release of one of Hole’s early incarcerated criminals. These factors push Hole to the absolute edge.

Reading Knife is not for the faint hearted but will offer rewards as you appreciate Scandinavian noir of the highest order.

Should be a Booker contender

Machines Like Me by Ian McEwan is one of those novels which should be on the Mann Booker Shortlist, but is not even on the long one.

We start with the Falklands War having been lost while artificial intelligence development has gone ahead with great speed. Thanks to people like Alan Turing, who has not been castrated, you can buy a synthetic robot easily but not cheaply.

McEwen has always been a master of introducing moral quandaries into ordinary lives.

Think Amsterdam, Saturday, The Children Act to name a few.

He is surely one of the greatest living English writers. His latest is as good as anything he has written.

Andolescent woes at their best 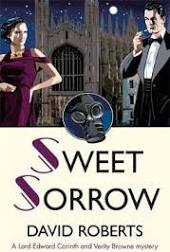 Finally, here is one of the funniest, most touching accounts of adolescent angst to hit our shores for a very long time.

Sweet Sorrow by David Nicholls introduces us to 16 year old Charlie, not much of anything, he thinks. He wrestles with growing up as he is dragged into an am/dram open air production of Romeo and Juliet. He has no interest in theatre and only decides to stay because he is smitten by Fran, the Juliet, in this execrable production.

In scenes of hilarity and pathos, Nicholls brilliantly places us in 1997, where Charlie looks after his drunken father, perpetrates a scam in the local garage, loses his virginity, inevitably, and lives to reflect, twenty years later, on the summer madness of halcyon days.

Sweet Sorrow is another obvious contender for the Booker. Another glaring error?

Pah! A pox on both your houses, long list and short!

Yes, I know some prefer a plague o’ both your houses. I prefer pox!