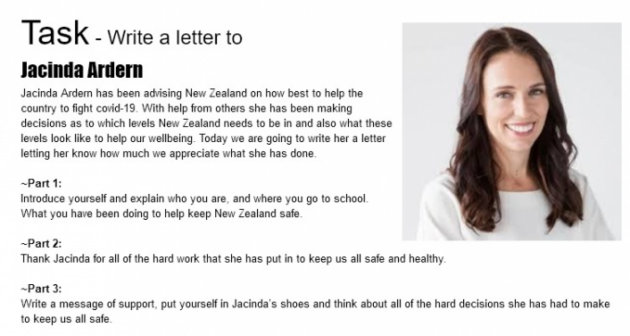 Jacinda Ardern has tacitly endorsed the Ministry of Education’s role as Ministry  of Indoctrination. The ‘Task’ (see above), is prima facie a non-political, gender-neutral, racially-sensitive exercise designed to teach children how to write letters; but rather than a letter to a friend or relative or business, the model instructions are a paean of praise to our PM; a personal commitment of support for her and her Government. When each ‘part’ is scrutinised, a disturbing picture emerges.

Paragraph 1: tell the Prime Minister you are an obedient Kiwi, obeying her instructions and are helping  to keep New Zealand, oops, Aotearoa, safe.

Paragraph 2: (i) praise the PM; (ii) heap thanks upon the PM; (iii) repeat the myth that young children were in serious danger; (iv) say she is the embodiment of the perfect PM by working hard (v) say the PM has kept every iwi safe. What an amazing herculean effort, clearly exceeding Winston Churchill in World War II in helping save Britain and the Commonwealth from Hitler’s Nazi’s. NB: Churchill’s Ministry of Education did not think his efforts warranted letters of support from school children.

Paragraph 3: (i) say you are a supporter; (ii) totally identify with the PM, emotionally and intellectually by “being in her shoes” and thinking like she thinks. Even parents do not expect their Emma or Rua to so fully agree and identify with them that step into their shoes.

As a result of the Ministry of Education’s directive, thousands of school children have written and any have said they will vote for Jacinda as soon as they can vote. Is there a more glaring example of what is currently described as “soft indoctrination”– all at taxpayers’ expense?

The Task effectively condemns pupils who might have their own nascent ideas. “Do and think as you are told” is the latest change in ‘education’. Freedom of thought is out. The only ideas they can express in their letter to the PM are those dictated to them by a Government Department. This power of Government flows though principals and teachers: the ultimate dictators of thought to mere pupils.

The need to give homage to our PM is heavily underlined by the implication that Jacinda only replies to those who give her the adulation she considers her entitlement, and a failure to get her response becomes your personal failure.

Psychological research indicates that young people are far more susceptible to “soft” indoctrination–they are still in the process of formulating their own thinking. For the Education Department to instruct pupils to write these letter should be seen for what it is: the intellectual abuse and emotional manipulation of the maturing mind. Why has Jacinda Ardern, wearing her hat of Minister for Children, not opposed this misuse of a (grossly underperforming) education system, the abusive manipulation of children’s minds, and the falsehoods that she is a saviour akin to Joan of Arc?

4 thoughts on “Ministry of Education, or Ministry of Indoctrination?”