Many of us remember the Springbok rugby tour of New Zealand in 1981 and recall the scenes at Hamilton and Auckland when those opposed to apartheid stopped the game between the All Blacks and South Africa.

Will anyone protest when it becomes obvious to the sheeple of New Zealand that it is happening here?

Only it is the reverse of the South African situation. Here, about 15% of the population who call themselves Maori are moving very rapidly under this government to take over this country. Actually, although they may call themselves Maori, they are only part-Maori; in fact sometimes they are as much as 31/32 European or other ethnicities, like Hana O’Regan.

But not all part-Maori are in on the rort. Many don’t care about skin colour from ancestry and integrate happily with us Pakeha and other ethnicities. It is only a relatively small number of privileged elite part-Maori politicians, academics and other activists who are stirring things up [probably only numbering in the hundreds —Eds].

The good old days of equality and happily mixing

I keep thinking back to the times of my youth. We all mixed with Maori in our schools and rugby teams and we were all friends; there was no distinction. We were all New Zealanders. Unfortunately, that all began to change in the 1970s. Malcontent activists Donna Awatere and Syd Jackson started the ball rolling.

Assisted by successive governments, of which the Jacinda regime is indisputably the worst, today’s activists are tearing this country apart.

It’s largely due to the fact that over the past 50 years these part-Maori activists have changed the wording and meaning of the Treaty of Waitangi to suit themselves. It’s an interesting situation where a treaty is made between two different groups, but one side later changes it to suit themselves.

The only true Treaty was, and is, the Maori version from 1840. It was the one that was signed by over 500 chiefs. The Maori version is called Te Tiriti O Waitangi. This true treaty has never been used. However, Maori radicals continually refer back to Te Tiriti when they want something.

Readers are referred to this article entitled; “50 Years of Settlements Using a Fake Treaty of Waitangi.”

What Used to be called National Radio

National Radio was an excellent radio station: great announcers and very good unbiased programmes. The all-night programme was continually praised.  It was a sad time for many listeners when all-night broadcaster Lloyd Scott retired.

Seemingly coinciding with the appointment of part-Maori Dr Jim Mather as head of the board of National Radio, several changes took place. The name was initially changed to Radio New Zealand National. Then the national was dropped and finally it was simply called RNZ. During this time it also became maorified. Te Reo infiltrated everywhere. A Maori bias slowly crept in.

I switched off RNZ for good about four years ago, and haven’t been back to it since. (I have also recently turned off TV1 and TV3 for the same reasons). Recently I checked on the composition of the RNZ board. Now in a board of 8 people three are part-Maori – that’s a 37% representation for a national percentage of about 15%.

Then I noticed several articles on the internet relating to part-Maori activities. These came under the heading Te Ao Maori–Maori news. But on all, I saw the RNZ logo was on the top L.H. corner of the front page.  At the end of some articles were the letters in large type: LDR which stood for “Local Democracy Reporting”. A statement written alongside said: Local democracy reporting is a public interest news service supported by RNZ. None of the articles I saw, suggested democracy at all. But even more worrying was the RNZ logo. I have shown it below. 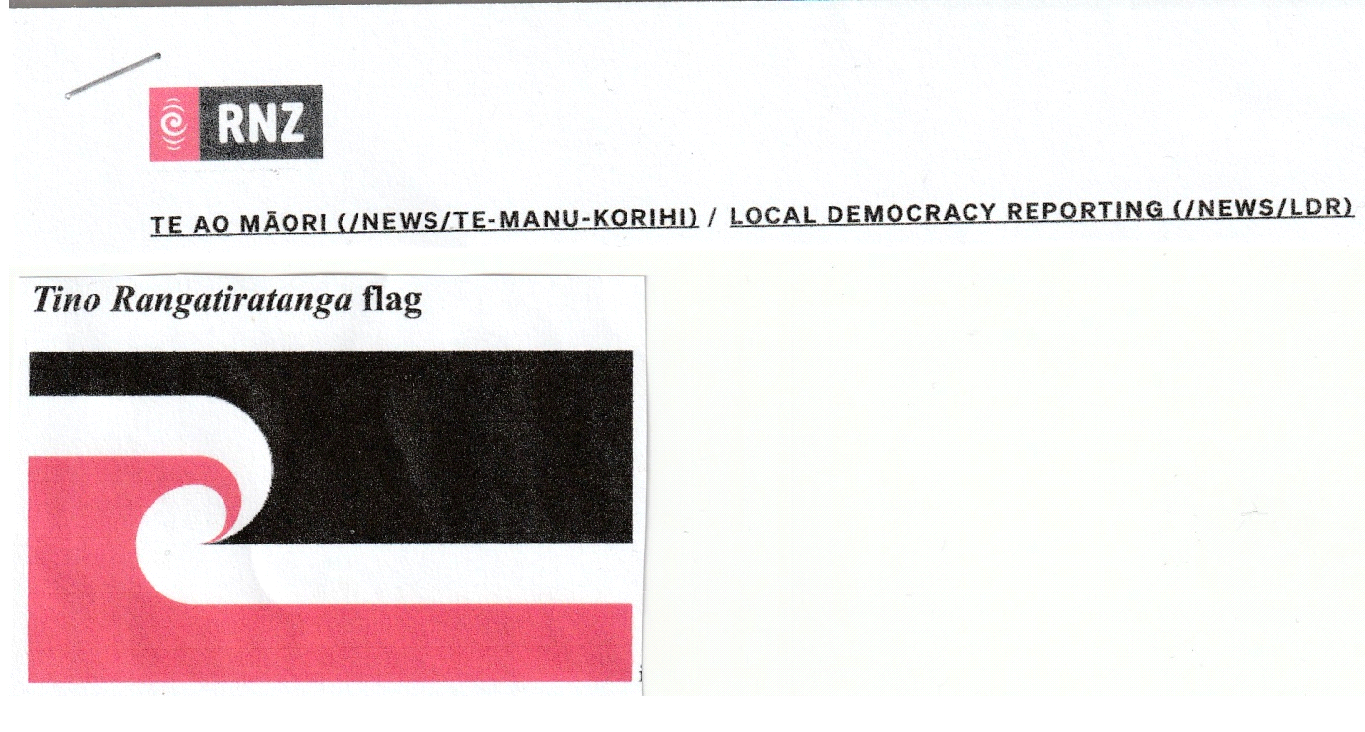 The little curly bit to the left does suggest a Maori design.  But look at the colours. They match exactly the colours on the Tino Rangatiratanga flag.  This flag is the flag of the part-Maori independence movement.  So we need to ask the question — Does RNZ support the Maori independence movement?  Or, are the colours just a coincidence?  One way or the other, it appears that what was national radio is lost to the 85% of us who are non Maori.

What Used to be Called Child, Youth and Family

Child, Youth, and Family was replaced by a new ministry after March 2017 — the new name was the Ministry for Vulnerable Children. This did not last long. Following the formation of the Labour led coalition, the Government in October 2017 renamed it Ministry for Children. This was later amended by Labour to Oranga Tamariki, which few New Zealanders would be able to translate.

In 2019 a petition to change the name of Oranga Tamariki was launched online as Maori lawyers, midwives and social workers called on the government to stop taking Maori children from their mothers.  One said that it did not deserve a Maori title because the organisation hurt Maori, and tikanga (customs) and te reo did not govern its policies.

Then presumably the same anonymous person states: “The Treaty of Waitangi promises that all things Maori and all things English would be treated the same.”!  But the trouble is we know we are not all treated the same are we?  The list of special privileges for Maori is endless.

The Advisory Board is made up of four part-Maoris: Matthew Tutaki, Dame Naida Glavish, Shannon Pakura, and Sir Mark Solomon. Their report would be binding. Tutaki said the Crown would act on more Maori values.

There is no pakeha representation on this advisory board, and the report goes to a part-Maori

The part-Maori party co-leader Debbie Packer said “They were expecting a by Maori, for Maori approach to be adopted as part of any changes.”

That probably says it all. In fact some critics of Oranga Tamariki wanted power handed over completely to Maori.  I wonder what the outcome will be if another Nia Glassie turns up?

Essentially then, it appears that part-Maori continue to be running Child Youth and Family.

Earlier in September 2021 the Family Court ruled that six year old Maori girl who had lived with Pakeha care givers for the past three years was to stay with them after Oranga Tamariki wanted to remove her because her “cultural needs” were not being met.

This girl was traumatised and neglected before being placed with the Pakeha couple. Fortunately for Moana, warmth, love, affection, and mental and physical wellbeing triumphed over cultural ideology.