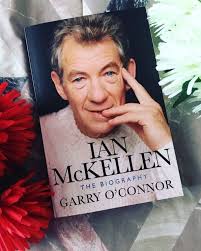 Let’s start with Ian McKellen – The Biography by Garry O’Connor.

I have lived with McKellen, in a manner of speaking, for over fifty years, after I first saw him on stage in Oxford in a Russian play called The Promise. His fellow actors were Ian McShane and Judi Dench.

I still remember the impact of the performances and the play which was set in Leningrad at the height of the siege, during the Second World War.

When I realised this was an unauthorised biography I was reluctant to read it, but McKellen was not against the book, only he did not want to spend time on the detailed interview and research that would have been involved. He was too busy!

The result of O’Connor’s work is a fascinating and sensitive outline of the private and the public man, one of our greatest actors.

Chances Are by Richard Russo is another gem from one of America’s best authors.

With some beautiful plotting the characters leap off the page as relationships between Lincoln, Teddy and Mickey are delineated with love and a dash of mystery.

If you have read Empire Falls or That Old Cape Magic you will need little encouragement to catch his latest.

If you haven’t read him before, you have a treat in store.

Having read all of John Le Carre’s books since he first published in the sixties, it was with no little sadness that I found his latest Running In The Field  boring, with little excitement in an old fashioned spy story which meandered to a limp conclusion.

A brave book on the despicable Harvey Weinstein

Finally, the most significant triumph of journalistic endeavour in the last few years Catch and Kill by twenty nine year old Ronan Farrow.

His meticulously researched account of the corruption, fear and bribery resulted in Harvey Weinstein being charged, and networks like NBC’s reputation tainted and besmirched.

Catch the story before it is published and kill it, hence the title of this extremely upsetting book.

Farrow interviews scores of women who had the courage to speak out about rape, seduction and blackmail in what is show business, American style.

He himself was threatened by hired thugs, lawsuits and lies about his own life and his mother Mia Farrow.

The book is not for the faint heartened as some of the accounts are truly sickening to read.

But truth will, hopefully out, as Weinstein faces trial in January.

(My next article is Ralph’s Book of the Year which I finished a few nights ago, but you will have to wait just in case another emerges in the next couple of weeks.)