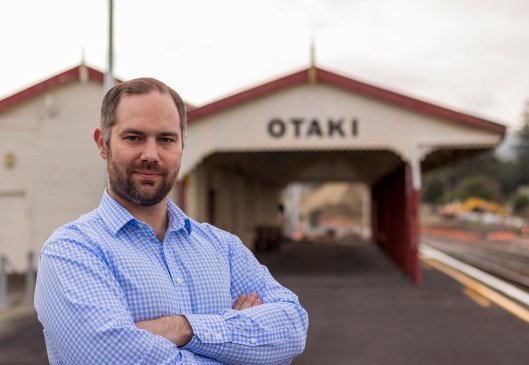 The Ōtaki to North of Levin ‘Ewy’ funding welcomed, but scant rail investment is “pathetic”

Kāpiti Coast commuter rail campaigner Gwynn Compton has welcomed the Government’s announcement of funding for the Ōtaki to north of Levin expressway, but says the lack of any investment or accelerated timeline for the double tracking and electrification of the rail network from Waikanae to Ōtaki, or even for new hybrid train units for the Capital Connection service, is a missed opportunity and shows the Government isn’t serious about its commitment to better transport infrastructure or addressing climate change.

“Funding for the Ōtaki to north of Levin expressway will alleviate weekend and holiday traffic issues that have plagued our region for decades. But the Government’s plan for rail services in Kāpiti and the Horowhenua, which essentially amounts to refurbishing the Capital Connection carriages and funding the bare minimum of track upgrades, is pathetic, short-sighted, and a missed opportunity to show genuine leadership on infrastructure investment and air pollution reduction,” says Cr Compton.

The wider Kāpiti-Horowhenua region is growing rapidly with population growth rates having more than doubled in the past five years. Growth rates are likely to skyrocket further when Transmission Gully opens and draws even more commuters who will need fast and frequent train services into Wellington.

“If the Government is even remotely serious about making meaningful investments in infrastructure and tackling climate change, then they must fund new hybrid electro-diesel units for the Capital Connection as well as the extension of Wellington’s commuter train services by double tracking and electrifying the rail network at least as far as Ōtaki,” says Cr Compton. 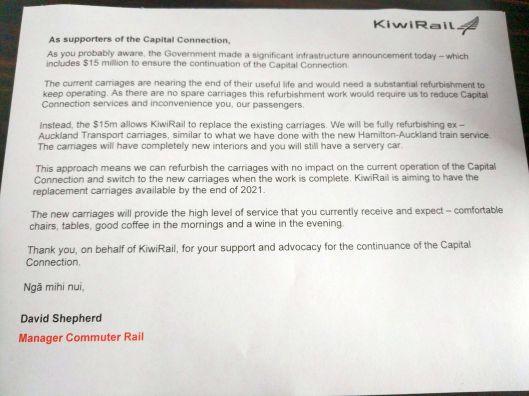 The Capital Connection train between Wellington and Palmerston is getting hand-me-down Auckland cars.

“Double tracking and electrifying the rail network to Ōtaki to enable fast, frequent, reliable, and environment-friendly commuter train services will benefit communities from Waikanae through to Levin and beyond. It will take cars off our roads and reduce fossil fuel emissions, free up scarce commuter car parking in Waikanae and cut the pressure on car parking in Wellington City, and it will provide vital links to employment opportunities, education, and healthcare for the people of Ōtaki.”

Under Greater Wellington Regional Council and the Government’s current planning, the extension of full commuter rail services to Ōtaki won’t happen until sometime after 2039, meaning there will have been at least a three decade gap since full rail services were last extended to Waikanae in 2011, which Gwynn Compton says isn’t good enough.

“The people of Ōtaki waiting another 20 years, if not more, for full commuter rail services to reach them simply isn’t good enough. If this Government is as serious as they claim they are about tackling climate change and New Zealand’s infrastructure challenges, then they need to commit to funding the double tracking and electrification of the rail network to Ōtaki now to meet the needs of our growing region.”