The Crusaders showed today just what a very good team they are. —Chiefs coach, Warren Gatland

Crusaders cruise to a comfortable win

The visitors scored five tries to one in picking up maximum points in Hamilton on Saturday, but the game was not without controversy. The Chiefs, without a win in Super Rugby Aotearoa, were trailing just 19-20 when the Crusaders were awarded a try to Sevu Reece off a clear knock-on. The visitors followed up this lucky break with an excellent try to replacement winger Leicester Fainga’anuku on the left flank to rub salt into the wound and take the score out to a winning 32-19.

The home team made too many mistakes and kicked away too much possession to be in with a chance. The powerful Crusaders forwards used their weight advantage to win a number of scrum penalties and they were well led by Sam Whitelock who was also a dominant force in the lineout. Behind the pack, first five Mo’unga was in good form, setting up a number of attacking opportunities and three tries, while right winger Reece was a handful for the Chiefs with his tricky running. However Mo’unga’s goal kicking was inconsistent, whereas Damian McKenzie kept the Chiefs in the game until the controversial try, with four penalty goals. In the home side forward pack Lachlan Boshier was again prominent scoring their only try and winning a number of turnovers.

However, the Crusaders were just too good and retained their top place on the table with a game in hand.

Blues dominant under the roof 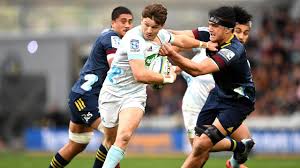 In front of a big crowd at Forsyth Barr in Dunedin, the Blues came back from two losses to win comfortably 32-21 scoring five tries to two. This was a high quality match with plenty of running rugby, however the visitors were just too slick in the backs and had the better of the set pieces. As half back Finlay Christie had a very good game with speedy passing, and impressive backing up netted him two tries. Beauden Barrett at first five was first class with his ability to skillfully set up his outsides with well-timed passes and his judicious tactical kicking.

The Blues won the forward battle and frequently pushed the Highlanders scrum back. Captain Patrick Tuipulotu was impressive in the tight and the loose, and Akiro Ioane ran strongly from the back of the scrum, tackled vigorously and scored a first half try. Overall the Blues defence was relentless and didn’t allow the home sides backs to break the line. Both of the Highlanders tries were from forward drives and were scored by their two most impressive players  – captain Ash Dixon and number eight Shannon Frizell.

The competition could be decided next weekend

It doesn’t get any easier for the losing sides. The Highlanders meet the defending champions in Christchurch and the Chiefs travel to Wellington to play the third placed Hurricanes. If the Crusaders beat the visitors on home turf on Saturday, they win the competition.