Since my last newsletter, the Taxpayers’ Union has continued to expose how the Government has frittered away the $62 billion Cv response fund.

The Cv response fund was 20 times larger than Shane Jones’s infamous Provincial Growth fund, and yet even before the current lock down, Grant Robertson had whittled it down from $62 billion to a measly $5 billion.

So, what happened to the money?

Grant Robertson is trying to tell New Zealanders that the money went toward essential business support like the wage subsidy. In reality, wage subsidies made up less than a quarter of the spending.

Below are some examples of how the money was actually spent. Judge for yourself whether this spending really has anything to do with Cv.

Following our work exposing this abuse of the covid fund,it’s good to see the Opposition parties now picking up our examples and pushing them hard in the media.

With a new lockdown imposing massive costs on businesses, households, and taxpayers, there is a real risk that the money will run out. Grant Robertson now claims that he can claw back some of the funding that was allocated but not spent – that’s almost an admission that he misused the fund.

Notice how the ad is all about the discount on EVs, and completely ignores the other side of the policy: new fees on petrol vehicles.

This ad was funded by taxpayers. In fact, as we revealed to Radio New Zealand’s Morning Report, the New Zealand Transport Agency has spent a total of $183,751 advertising its “Clean Car Discount”.

What a pointless exercise in self-promotion. The amount of media attention this feebate scheme has received since it was announced has surpassed anything NZTA might hope to achieve through paid advertising.

Regardless, retailers of low-emissions vehicles already have an incentive to promote the discount themselves. If the widely-publicised discount is failing to attract people to electric vehicles, that suggests a problem with the policy itself.

The most egregious part of this campaign is the $34,000 allocated for ‘content partnerships’ with Stuff and NZME. In other words, NZTA is buying positive media coverage. You can view the taxpayer-funded fake news story here.

This raises serious questions about the independence of the media. How can a media outlet effectively scrutinise a policy when at the same time they’re paid to promote it?

This campaign isn’t just wasteful – it’s misleading. The ads say the discount will help you ‘do your bit to help get New Zealand to carbon neutral’. A simple understanding of New Zealand’s Emissions Trading Scheme shows that choosing an EV over a petrol vehicle just frees up emissions to be produced elsewhere under the cap. Buying an electric vehicle might reduce the emissions for your household – but claiming it cuts New Zealand’s overall emissions is greenwashing. NZTA should do better.

Higher fuel levies are coming: so why introduce a ute tax?

With the headlines dominated by COVID-19, an important story escaped attention: motorists are set to pay more in ETS levies at the pump. That’s because the Government is lifting the price cap on carbon credits.

ETS levies are nothing new. But this latest move raises an obvious question: if the Government can reduce transport emissions with the ETS, why is it bothering with the new ute tax?

The ute tax is paid in addition to the ETS levies you pay at the pump, making it a double tax.

At least ETS levies are fair – the cost to the taxpayer is proportionate to the amount of emissions produced. In contrast, the planned ute tax unfairly whacks a minority of New Zealanders with disproportionate costs. It’s less about reducing emissions and more about bullying ute drivers into lifestyle change – costs and practicality be damned.

Climate Change Minister James Shaw needs to explain to his colleagues that, because we have an ETS, we can scrap the ute tax, along with the other costly and pointless regulatory interventions proposed by the Climate Change Commission.

Fire service wastes money, then runs out of fire trucks

Fire and Emergency New Zealand (FENZ) has a major problem: its fire trucks are breaking down, and it doesn’t have any plans to replace them.

FENZ does not have a funding shortage. In fact, its latest annual report reveals that it collected $13 million more in revenue from the fire services levy than it had forecast for the financial year.

The problem here is a failure to focus spending on the things that matter. A research paper we released last year found that the merger of urban and rural fire services led to massive cost blowouts in back-office bureaucracy.

The department’s culture of wasteful spending appears to have been solidified by the merger. We revealed the rebranding alone for that merger came with a $6.2 million price tag.

Meanwhile, new fire stations, even in small communities, have been gold-plated with extra bays, kitchen facilities, and training rooms. Lake Okareka’s station cost $1.9 million, Wanaka’s $4 million. FENZ’s newest fire station in Athol, a community of 87 people, cost $1.6 million – an incredible $46,000 per resident. Admittedly in that case, FENZ was able to swindle most of the station’s cost out of the Government’s COVID response fund, not that they needed the extra money.

FENZ does not have to justify wasteful spending to Cabinet, as it collects revenue through the fire insurance levy, bypassing the Budget bid process. We’re urging the Government to switch to a more accountable funding model as part of the current review into FENZ’s funding.

A now-deleted job ad reveals that the Department of the Prime Minister and Cabinet is hiring someone specifically to track “disinformation”. 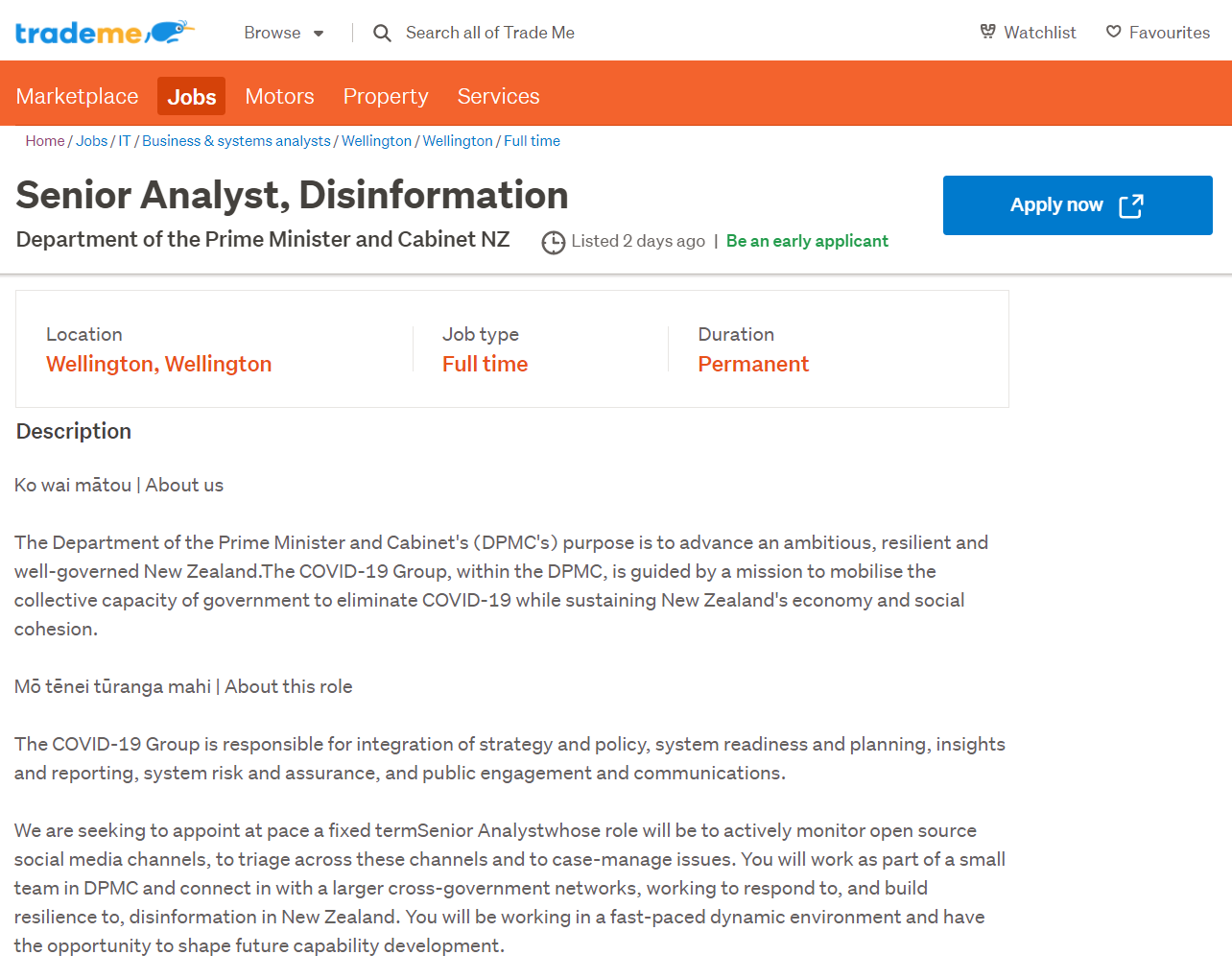 Click here to view a larger version of this image.

This sounds Orwellian, to say the least. Who gets to decide what counts as disinformation?

DPMC of course reports to the Prime Minister’s office.

Leading public sector bosses are increasingly dismissing the importance of productivity, preferring to focus on broader concepts of “wellbeing”. Some have called this new way of thinking “Aoteanomics”.

In our latest episode of our Taxpayer Talk podcast series, I was joined by Professor Robert MacCulloch of Auckland University to find out what exactly Aoteanomics is, and why such a radical shift in public sector thinking has escaped public debate.

A final message from the Taxpayers’ Union propaganda communications department 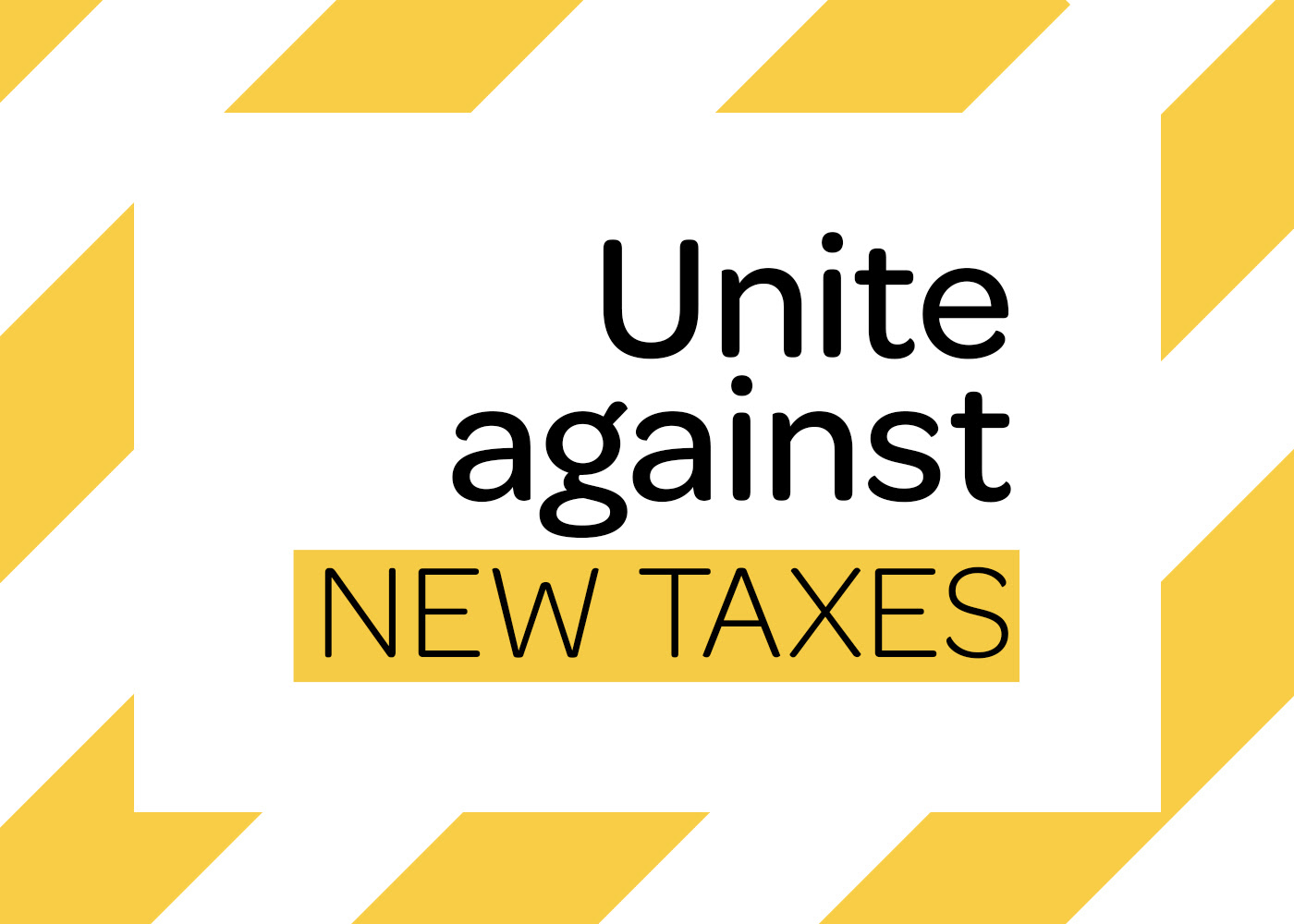 We hope you and your family are doing OK in the current lockdown. Fingers crossed for a great weekend at home.

1 thought on “Taxpayers Union: how the Government exploited the China virus to squander more of your money”