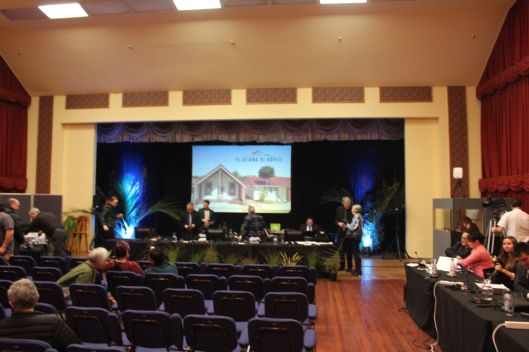 Setting up for the hearings at Southward’s.

The fourth hearing of the Waitangi Tribunal took place at Southward’s Car Museum, Ōtaihanga, over 10-12 June 2019.

The intention for Wai 1018 claimants giving evidence was to introduce to the Waitangi Tribunal and the Crown Law Office a visual presentation of lands we lost.

The Southward’s Car Museum is situated on land formerly cultivated and owned by the wife of Ta Eruini Te Tupe Tu – Ta Watene Te Nehu.  The land was confiscated under the Public Works Act of 1870-1880 for the railway line, and the Museum sits within the 20-chain [approx 400 metres] boundary from the Railway.  In the Native Land Court on 1 May 1890, Judge W.G. Mair and Judge D. Seawell granted an “Order made in favour of Wi Parata for Ngarara West A Railway Reserve” — Ngarara West A, known as Whareroa–North of Queen Elizabeth Park to Kukutauaki 1 south of the Otaki River, according to the District Survey Office in Wellington in 1892.

Ngātiawa ki Kapiti Wai 1018 claimants’ participation in this fourth hearing came with the management of the ongoing dispute spanning seven generations.  They refuse to “get caught in the inaki net.”

Ngātiawa on Kapiti Coast has not been permitted to have a “Tribal Title” by the government since 1847.  This breach of the Treaty of Waitangi Article 1-2-3 is reinforced in 2019 by the government structure of Te Atiawa ki Whakarongotai/Te Atiawa ki Kapiti Charitable Trust — mandated Iwi Trustees.  The trustees objected to Ngātiawa Wai 1018 claimants giving evidence on their land, historically cultivated and owned by the collective of Ngātiawa Hapu/clans Ōtaraua, Hinetuhi, Kahukura, Tuiti, Rahiri and Uenuku.

The method used by the Waitangi Tribunal raised concerns over questionable Judicial processes regarding Wai 1018.   Wai 1018 wanau who gave evidence were:

They presented their evidence and managed Crown Law Counsel cross-examinations with dignity.

Wai 1018 Kairangahau gave evidence for 20 minutes and was cross-examined for 3 hours. Jacki Cole, Crown Counsel, had not received the final Wai 1018 Evidence Brief — “Copyrighted to Ngātiawa ki Kapiti Iwi Charitable Trust.” Nor had she cited evidence-based references of over 10,000 pages — a mere third of the evidence-based research on our Tipuna and their lives on the Kapiti Coast.

Jacki Cole at times asked irrelevant personal questions like, “Do you have a personal issue with Wi Parata?” The answer: “We do not believe Wi Parata was sitting in Parliament by himself in 1873.”  The Wai 1018 issue is with a Member of Parliament and the injustices actioned by the government.

However, regardless of the dance Crown Counsel are trained to perform, during the 3-hour cross-examination, Kairangahau answered all questions on point.

The two Crown Law colleagues present with Jacki acknowledged to Wai 1018: “We heard your words” to our faces.  They also recognised it was apparent a lot of bullying and thuggery was going on at the Marae.

In the previous three hearings, a total of 14 days, the majority of filed evidence made no mention of the injustices at the Ngarara NLC by Wi Parata, a Member of Parliament in 1873.  Evidence by Wai 88, 89, 1628, 1945 submitted in three hearings was all about Wi Parata MP, which insinuates the Ngātiawa Ahi Kaa who remained after the 1848 migration, does not exist. There is confusion on the Kapiti Coast from the common comment “we are all the same family”: we are not!

The Waitangi Tribunal Historian, Tania Smith, asked for a response on whakapapa — this is our reply, 1 July 2019.  “To pretend Tamati-Pirikawau wanau is the Parata family 166 years after Ta Kahutatara Ngawaru-Nuku death and 144 years after her son Ta Pirikawau Karapu death through a marriage of a cousin.  Wai 1018 mokopuna of Ta Pirikawau and his Mother view this as repugnant.

Despite the contemporary marriages from the 1960s to 2000s between Eruini-Tamati and Stubbs/Parata families, the tamariki born into these unions Ngātiawa Wai 1018 will never exclude that aspect.

Due to ongoing lateral violence, discrimination and bullying by the Parata family, the mokopuna of Wai 1018 Ngātiawa collective of Hapu – Ariki Kahukura, Hinetui, Ōtaraua, Tuiti, Puketapu, Uenuku and Rahiri no longer see the necessity to participate in the government-structured systematic oppression via the politician’s family — the best progressive resolution for our mokopuna in the future.

KCDC has practised exclusion and backroom deals for many years.  They will do what the Atiawa-Raukawa Toa A.R.T Confederation tells them to do, which is dominated by Ngati Toa and Raukawa.

Ngātiawa Wai 1018 refused an offer to get into that “inaki/net” at KCDC a few years ago during this time of turbulence between Te Atiawa ki Whakarongotai Marae V Te Atiawa ki Whakarongotai ki Kapiti Charitable Trust.  Both of these organisations are controlled by people who have primarily identified as Ngati Toa and Raukawa, the majority of their lives.  Te Atiawa Marae and Charitable Trust oppose Wai 1018 — who have primarily identified as Ngātiawa from the day they were born.

A commentary in the Kapiti News of 3 July states that with the withdrawal of  Te Atiawa ki Whakarongotai Charitable Trust from the KCDC Whakameinga Komiti “the mooted replacement, called Tri-Iwi, is already dismissive of a range of local Maori voices as old dominance of smaller hapu dies hard. It is being organised in haste.”

Several Ngātiawa members reading this article took offence on two levels. “Tri-Iwi” had no explanation.  Who is this? The public insinuation of a new “Tri-Iwi” after a contentious fourth hearing of the Waitangi Tribunal is culturally inappropriate for all claimants who participated in the hearing.  Who are the “smaller die-hard hapu?”

Is this the best time for any KCDC Councillors to play politics implementing decisive measures to maintain the divisions and control of the Marae v Charitable issue, in truth they are the same family, Baker-Ropata-Parata’s.

The Mayor needs to be transparent and honest: tell the community what is this new “Tri-Iwi?”   It has been said by a KCDC councillor, this “Tri-Iwi” is to circumvent any Treaty Claim Settlements on the Kapiti Coast in the future, whatever that means to KCDC. Ngātiawa ki Kapiti Iwi claimants, for now, are protected from this organised chaos and infighting within KCDC and Te Atiawa.  We are not permitted for now to have a “Tribal Title.” A blessing in disguise.