Councillor Prvanov has defied Waikanae residents’ clear need for getting their full library back. She voted for the council instead wasting money on the Mayor’s pet Gateway project at Paraparaumu Beach. This is guessed to cost $4.6 million and $100,000+ annually in ratepayer subsidies. It is to be a departure lounge facility.  Visitors to the Island will be in there for 10 or so minutes while being bio-security checked.

At the Council meeting of 28 May it voted 8-3 to proceed with the project in order to apply for a Provincial Growth Fund subsidy.

For a councillor it is clearly easier to back the Mayor’s pet projects. If you don’t, he will defame you by describing you as a “neocolonialist” — Councillor Randall was tarred with that silly label. Or he will call you a “naysayer.” A naysayer is “a person who habitually expresses negativity: even if those things are going well.” In other words, a thoughtless fool.

No-one likes to be bullied. Yet Guru’s obedient councillors encourage bullying by failing to object to his descent into the Bully Boys quagmire.  Where is Rob McCann, CEO of the “White Ribbon” campaign, councillors Sophie Hanford, Hollborow et al. Their silence is aquiescence. They failed to apologise for objectors being labelled as “neo-colonialists,” “racists” or “naysayers” before each of them spoke, and so distance themselves from the bullying of the Mayor.  No, they allowed all opponents to be dismissed as mere naysayers. That’s the standard to which this new council has already sunk.

KCDC accepted a report proclaiming tourist numbers to Kapiti Island post Covid 19 will skyrocket up 300% to 58,000 annually. But “naysayer” Mr Glen Cooper, the CEO of Kapiti Island Eco, had submitted that “the assumption that we build a gateway and numbers will increase by 300% is absurd and shows an extreme lack of commercial acumen of the report writer.  There have been small increase in numbers since 2007 some of which is in line with international tourism numbers.”

“Absurd” speculation was preferred by the majority of councillors presumably because dear Mr Cooper was a ghastly naysayer.

Mr Cooper also thought it inappropriate for KCDC to be paying for a facility that should be paid for by commercial interests and the Department of Conservation, who will not pay not a cent for it. Cooper said, “We have highlighted our concerns as to the public backlash of this building being built with the perception of rate payers that it is solely benefitting two commercial businesses”.

The Council decided that ratepayers prefer spending, to help private business and bail out DOC. Local disaster buildings like the Waikanae library and the Paraparaumu Community centre are way down the list. Such is the genius of our Mayor and most of the councillors.

Waikanae Community Board members James Westbury, Geoffrey and Margaret are all against the Gateway project in the short to medium term. It’s clear from two surveys that there is also big opposition to it by Ratepayers: the first was a straw poll by Beach FM — 70% of nearly 1,000 respondents said “no” which echoed the results of a more detailed survey of Kapiti business interests by the Kapiti Economic Development Agency or KEDA.  The Beach FM and key results of the KEDA survey are below. —Eds 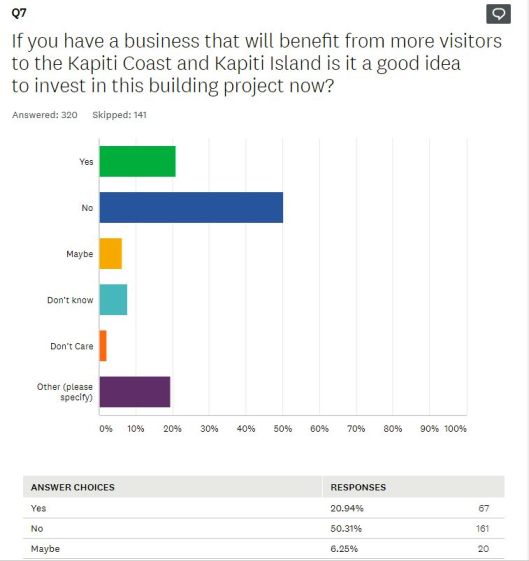 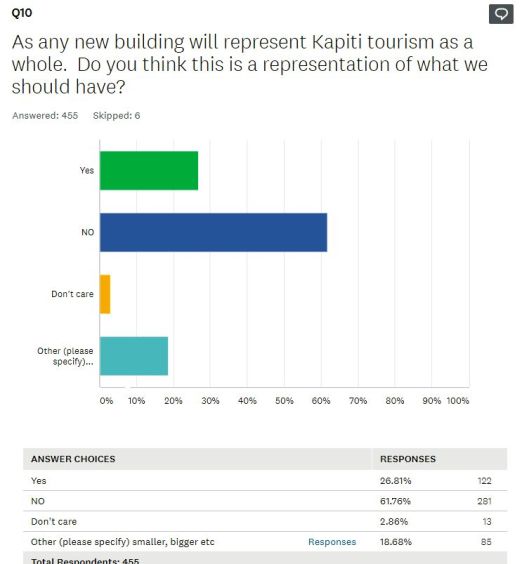 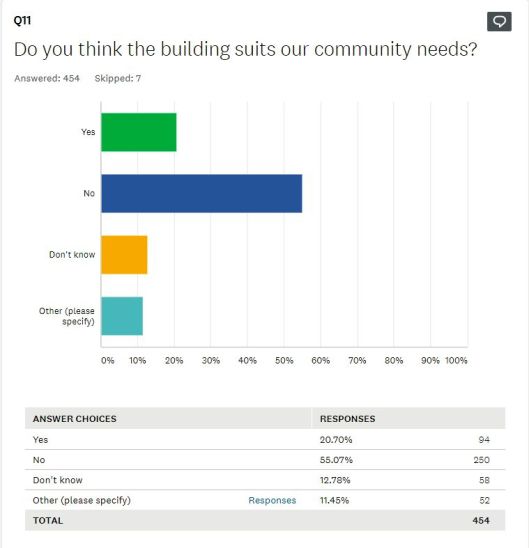