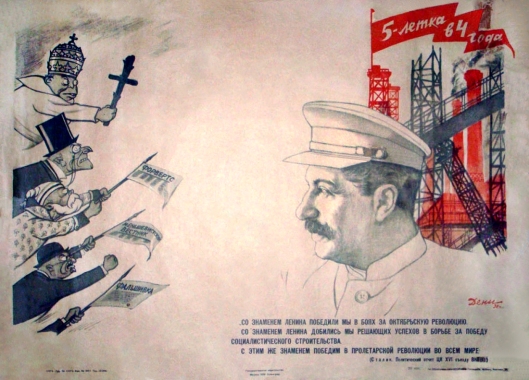 Stalin looks back at those he sees as “enemies of the people” — these include clergy, capitalists (the hooked nose has a strong anti-semitic implication), ОБЛО́М = oblomov = failures/bums, Mensheviks (part of the Russian socialist movement in the early 20th century, but who were at odds with Bolsheviks) and various other enemies including Kulaks (better off peasants).

This is a poster produced in the Soviet Union in 1930, featuring the communists’ blood red banner,  which given what happened there later that decade under Stalin was rather prophetic.

At the time Stalin saw the Soviet Union as still being engaged in class war and in fact, he saw class war as intensifying, and this provided one of the major justifications for the Great Terror from 1936 to 1938 in which whole classes of people were exiled or executed.

“With the same banner, we will win in the proletarian revolution all over the world”. –I. Stalin

This is a further statement that the Communists saw their objectives as applying world-wide and thus were the first real Globalists. Most Globalists today stem from the Hard Left.

1 thought on “this month in history, 90 years ago”