Last week, we challenged the University of Auckland over reports that students had been given an assignment where the lecturer threatened to fail anyone who took a ‘gender-critical’ view in an essay on transgenderism.

Aren’t universities supposed to promote ideas to be heard and challenged freely? Aren’t professors themselves supposed to invite criticism of their ideas and invite students to take critical views in their assessments?

Academic freedom is only possible when perspectives are marked on the merits of their argument, not just on the ‘approved conclusions’ they come to. An assignment that forbids critical viewpoints, no matter how well-argued and evidenced they are, is fundamentally opposed to academic principles, free speech, and basic education.

The Education Act 1989 defines academic freedom as including “the freedom of academic staff and students, within the law, to question and test received wisdom, to put forward new ideas and to state controversial or unpopular opinions”. This is also the definition given in the University of Auckland Code of Conduct. Failing a student for taking a certain position on a controversial topic is clearly against this law and ironically their own code.

We asked the University to clarify if the reports we’d heard were true, and what they were doing about it. Their response was very basic:

This is the sort of double-speak we expect to see from those who give lip service to free speech, but censor ideas they don’t like. “Of course, they can argue different perspectives in their assignments! But only if what they argue isn’t ‘discriminatory.'” Don’t forget, this isn’t our first dance with the University of Auckland.

This entire situation is totally inappropriate and frankly shocking. Such a blatant disregard for free speech can’t go unchallenged. We are continuing to hold the university to account and will be working to ensure that there is a price to undermining students’ free speech.

Attempts to undermine free speech at the University of Auckland remind us why we need legislation that has teeth.

Unfortunately, a recent attempt at doing just that has been blocked by the Government. ACT Party’s James McDowall’s Education and Training (Freedom of Expression) Amendment Bill was recently voted down as the Labour, Greens, and Maori Parties chose cancel culture over free speech. This legislation would have required universities to do more to protect free speech in order to receive public money but it didn’t even get to the Select Committee stage where the public could have had their voices heard on this issue. In a podcast this week, James McDowall claims this vote ‘makes you question how much these parties believe in free speech.’

Of course, universities are already required to protect free speech by law. But the lack of any teeth in legislation means it is more and more common for censorship to occur on campus, silencing both staff and students. That’s part of the reason why academics feel less free to speak openly on controversial issues, as Free Speech Union polling showed earlier in the year.

In a fantastic speech in Parliament, Simon O’Connor outlined the damage intolerance and the exultation of ‘safety’ and ‘hurt feelings’ will have on our free speech. [see earlier post —Eds]. If universities are to have any hope of helping us address the big questions, open dialogue is essential — but piece by piece we are seeing it removed. Across the Western world, university campuses are becoming more and more antagonistic to unconventional perspectives. Instead of being the very place where we expect reason and debate to develop our knowledge, an echo chamber is emerging.

While this piece of legislation has been voted down, your humble Free Speech Union will not rest until we see stronger safeguards for free speech on campus.

Those who can’t argue, ban: weak arguments reach for censorship at film festival

Attempts to pressure the Doc Edge Film Festival to cancel the screening of Dead Sea Guardians, a film drawing attention to the environmental plight of the Dead Sea, should be seen for what they are – intolerant censorship.

Of course, we unreservedly stand for their right to express this view. But what they simply have no right to do is impose it on others by pressuring a documentary festival to remove a film!

John Minto, a prominent pro-Palestine campaigner, claims that Dead Sea Guardians ‘centre[s] on a swim across the Dead Sea “from Jordan to Israel” but in fact is a swim “from Jordan to the Occupied Palestinian Territories.”’ This is enough, in his mind, to render the film dangerous propaganda.

Activists opposed to this film have plenty of outlets to make the case for their cause. But giving in to these censorious demands would set a dangerous precedent – essentially gifting veto rights to the most thuggish, most inarticulate and most intolerant among us.

Minto himself has been censored, when in 2010 he was arrested while protesting outside the ASB Classic tennis match in Auckland against Israeli player Shahar Peer’s participation in the competition. Unfortunately, the victims of censorship are only too happy to use the same tactics against their opponents when it suits them.

Censorship forfeits an opportunity for dialogue and debate, giving up the chance to persuade by opting instead for blunt force. Seeking to cancel the documentary highlights a lack of conviction and courage to challenge the content of the film itself.

We’ve called out the tactics of Minto and his crew and stood by the job Doc Edge Festival has to do, to defy those who would step on the rights for people to view material and make up their own minds.

Censorship of gangs certain to make problems worse, not better

Last week, the National Party announced a very troubling policy, saying that if elected into Government next year they will ban gangs from wearing patches and other insignia in public, prohibit them from gathering in public, and extend powers to issue Consorting Prohibition Notices to stop members communicating with each other.

The National Party’s proposed ban on gang patches has prompted plenty of discussion, even from Free Speech Union supporters and Council members. We understand that gangs aren’t the most popular group to defend, especially now as Auckland is experiencing a crime wave. But in the end support for free speech must be consistent and principled or our activities will be entirely in vain.

There are a number of reasons why the Free Speech Union stands against National’s proposed gang policy.

Bans on gang patches and insignia are unlikely to chip into gang numbers or limit their nefarious activities. It just amounts to harassment. You may argue gangs harass society so why not give them a taste of their own medicine? But is this the type of culture we want to normalise in our police force? State-sponsored harassment? The law as bully?

Our opponents frequently attack us for standing by the speech they consider ‘harmful’ or ‘hateful’- whether it is or isn’t, we simply know that once we start playing with where we draw the lines on free speech, sooner or later it’ll catch up to us.

Unsurprisingly, the Prime Minister has opposed this policy, claiming the evidence shows it doesn’t work: which ironically is also true for hate speech laws. Again, they make the problem worse. And again, we see the Prime Minister put politics ahead of principle.

The same rationale being used to target gangs here could easily be used against other groups. Sadly, censorship is the type of proposal that feels incredibly tough and productive, but it has limited results and risks all our civil liberties. 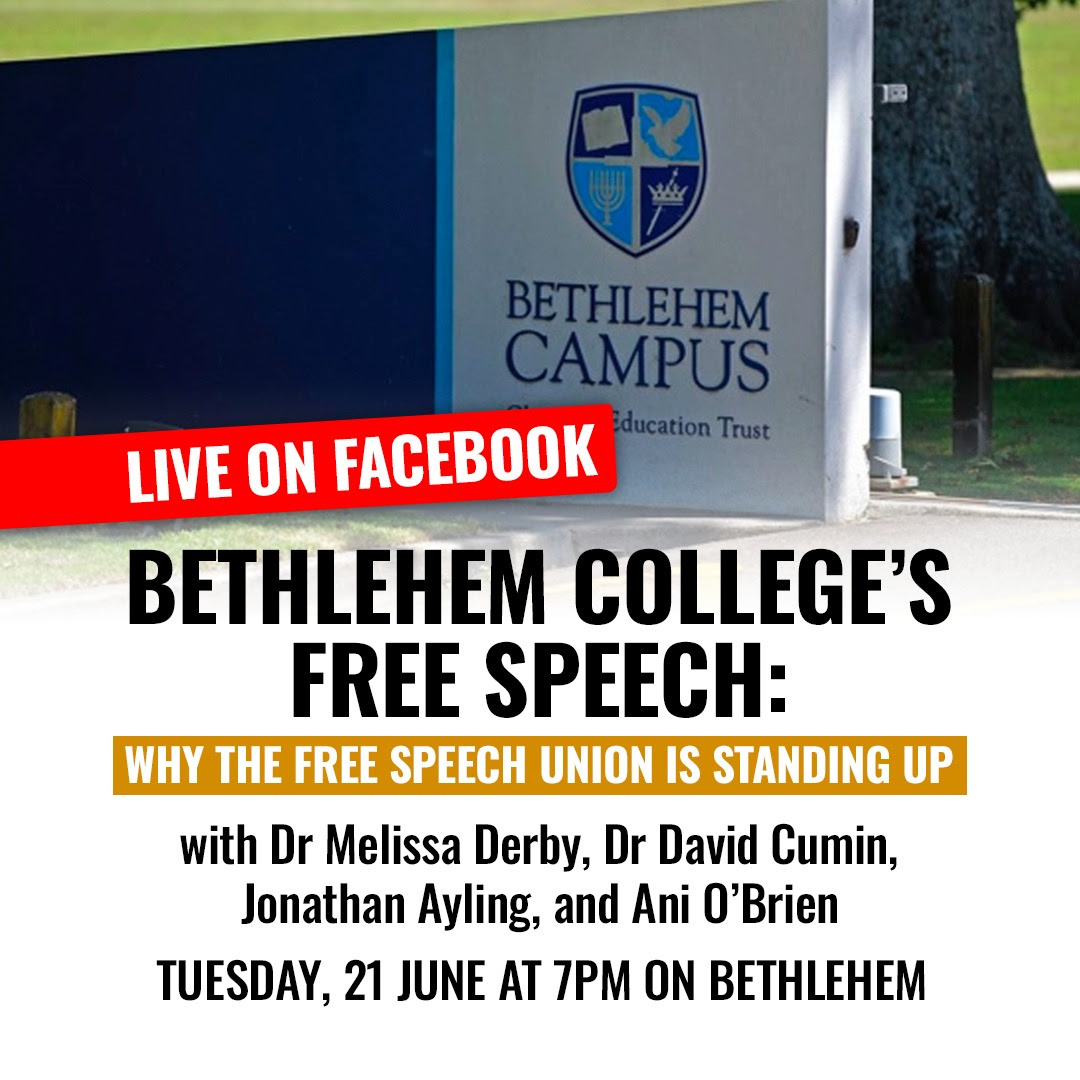 You’ve probably heard about the pressure that Tauranga’s Bethlehem College, a special character Christian school, has come under for including in its Statement of Beliefs that marriage is between a man and a woman. Many of you have reached out to us on this issue, and that’s why I’m going to contact you in a separate email specifically about this issue. (If you didn’t sign the public letter we emailed you about last week, you can join the over 15,000 Kiwis who have and sign it at www.freetospeak.nz)

But I needed to let you know that tonight I’m going live to outline why we are standing with Bethlehem College. I’m going to sit down with some of the great people who make our work as the Free Speech Union possible: Dr. David Cumin, Dr. Melissa Derby, and Ani O’Brien. It’s going to be a wide-ranging and fantastic conversation. Don’t miss out on it, follow this link to get a Facebook notification when we go live.

Here at the Free Speech Union, we work with people from across the spectrum. We’re not concerned so much with whether your opinions are right or not, but whether you have a chance to make your case- let others make up their own minds.

– Daphna Whitmore talks with social critical and English academic, Dr. Nina Power on her experience on being ‘cancelled’ in New Zealand in 2020;

– Podcast with Tory Whanau, Mayoral candidate for Wellington City, on access to public spaces and the need for tolerance in a divided age;

– Former Maori Party MP, Marama Fox, discusses her expereince visiting the protests at Parliament, and the controlling impulses of the current Government;

Free Speech Union Council members Dane Giraud and Ani O’Brien also both recently wrote fresh articles on free speech: Dane writing in Stuff about our need for a spirit of tolerance, not a rush to cancel from left or right, and Ani writing in The New Zealand Herald on the history of free speech, and our path forward today.