One of our regular readers is MAGA Mike who came to national attention in 2019 with his two campaigns of opposition to PM Jacinda Ardern. The first was the production and marketing of red baseball caps reading “Make Ardern Go Away” styled after the “Make America Great Again” caps used by Donald Trump and his supporters in 2016. Mike’s caps are also available in a variety of colours including camo and blue, because in America red is the colour of the Republican Party but in NZ that of Labour (the standard socialist/communist colour). The two parties are almost opposites in ideology.

The second was a “Turn Ardern” campaign when one of the weekly woman’s magazines put her on the cover. “Turn Ardern” encouraged people to turn around the magazines in newsagents and supermarkets to show the back cover and not the front.

Perhaps unsurprisingly, Far Left Jacindanistas unleashed a torrent of hate directed at him.

During the Jacinda government-ordered witch-hunt that year for right wing extremists by Police, he received a visitation from the Waffen-Schutzstaffel in common with many others up and down the country. They also tried to visit him when communist activists Byron Clark and John Williams falsely accused him of sharing the mosque shooter’s banned video. But he was not home and they phoned to say they were at his house, He said he did not want to talk to them.

Hard Left types in the media have also set out to defame him. Marc Daalder* of Newsroom/The Spinoff, a delusional obsessive who interviewed him at the time, claimed that he is a “white supremacist”, despite knowing that Mike’s wife is Thai and his two children, aged 6 and 9 are mixed race. Daalder, a communist-globalist and fierce opponent of nationalism, continues to tweet the false allegation that Mike is a “white supremacist.” Mike looked into taking a defamation case but it was going to be too expensive.

One or more people complained to TradeMe to have the caps banned. Initially they did, but then thought better of it after the intervention of broadcaster Sean Plunket. Daalder then contacted TradeMe to try, unsuccessfully, to get them banned a second time.

While Legacy Media attention boosted sales of the caps, which now total several thousand, they are not his prime business which is direct selling electric-assisted quality bikes directly from the factory. You may think bicycles would be thought favourably of by greenies, but their secular saint obviously matters more to them. This business too, was targeted by the Far Left, with fake negative reviews put on the webpage, some of which are below. Because of the labels he has been given, Mike rebranded the business Alt-Right eBikes. — “My eBikes are so far right they only go round in circles. Clockwise” 🙂 The fake reviews stopped after the rebranding (probably the Extreme Left don’t want to be seen buying at a business with such a name).

Knowing how vile and violent these people can be, however, he installed full CCTV and doubled the height of the fence and gates around his house.

He tells us: “I developed a condition of involuntary shaking after the stories were written about me being a far right extremist. I was worried what my parents and friends would think and I feared loss of income to my business and thought I would loose my firearms license.

“This was a hard thing to go through and I lost quite a bit of weight due to stress-caused loss of appetite and lack of sleep. But I feel stronger for having gone through this experience.”

* Marc Daalder is a young American (ca. 25) whose parents are influential, and who, after attending Amherst College at a cost of $US 127,000 per annum, seems to have been planted here, landing a job as senior political reporter for Newsroom NZ. His father, Ivo Daalder, is President of the Chicago Council on Global Affairs and has served since July 2013. He was the U.S. Permanent Representative on the Council of the North Atlantic Treaty Organization from May 2009 to July 2013. He is reportedly a specialist in European security. His mother, Elisa D. Harris is Nonresident Senior Research Scholar at the Center for International and Security Studies at Maryland. 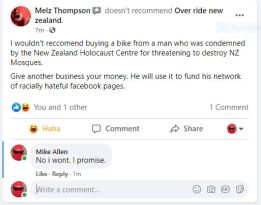 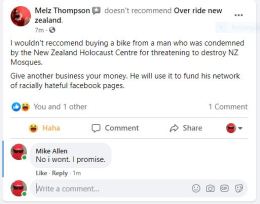