Clearly there needs to be salary caps imposed, and our view is that no staff member — least of all Dougherty — is worth more than $200,000 a year.

Having now mentioned the other elections, we ought to mention this.

On page 4 of the ballot paper there are 20 candidates for 7 board members on the board of this public health service body, of which the best known establishments are the Wellington and Kenepuru Hospitals.  You can read about what it does here.

A few Kapiti candidates for the councils (KCDC and GWRC) have mentioned things they would like to see the C&CDHB doing (e.g. an overnight hospital bed at the Kapiti Centre), although they aren’t standing for it.

As the functioning of the C&CDHB doesn’t get a lot of media coverage, and its board almost none, we figure most electors will ignore this page, just vote for names they know, or ‘donkey vote’ the list. Nevertheless, we suggest reading the candidate statements and vote for those whose stated emphasis is the same as your emphasis.

Protests and petitions haven’t worked (did anyone really expect them to?) — Westpac confirmed yesterday that Waikanae is one of the 19 small town branches that is going to close.

We can understand Destination Waikanae’s dismay — if visiting the bank was the main reason for people to go to Mahara Place, but other shops are a secondary reason, will they now just carry on down to Coastlands in Paraparaumu and do everything there?

And of course, it’s another vacant shop in that area.

The thing we wonder is, will the other banks now take that as a precedent and follow suit?  Perhaps if some Westpac customers transfer their account to say, the ANZ, they may not.

And already 1,900 have been received back.

Electors have until midday on Saturday 8 October to get their votes back to the KCDC building, either by post or in person.

“Council rail operations manager Barry Fryer presented car park plans to a Waikanae Community Board meeting on Tuesday night, saying that the long-delayed facility would now open in stages – 120 parks opening to the public in early December, with the rest in January, after asbestos has been removed from the site…”

“Wonder how soon the Tui sign is coming down….?”  (Tui breweries has been noted for a long running billboard campaign with popular statements, followed by “Yeah, right”)

“Water meters in Kapiti were a complete con. It was a $14 million leak detection farce. Already there is a $1.5 million deficit and the cost of water will continue to rise. My advice is to vote for those who advocate eliminating volumetric charging for water. Building a dam has always been the sensible option for Kapiti.” 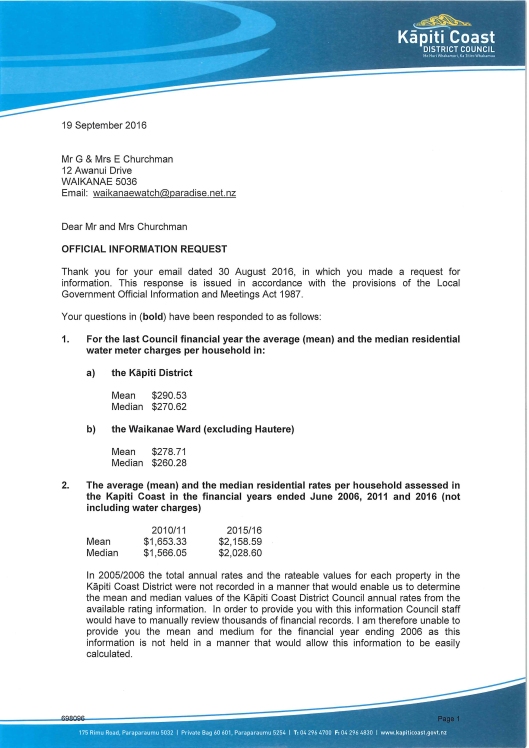 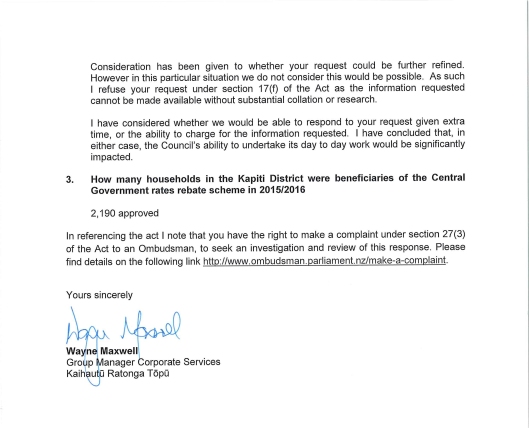 In statistics the median is the half-way point — half are above and half are below.  This is often important because average (mean) results can be skewed by a concentration of figures at one area in the spectrum.

But here are the Rates increases for Kapiti for the last 5 years (including the water charges on the 2015/2016 figures):

And what was general inflation in that same 5 years? According to the Reserve Bank’s inflation calculator, it was 4.1%

Have we got a problem with the KCDC?  The answer is obvious!

Another thing which is revealed in the figures given is that, contrary to what was reported at the time the water meters were promulgated, Waikanae people clearly use less water than the Kapiti average, not more.

Because of the population, the Paraparaumu Ward has two councilors, rather than the one each in Otaki, Waikanae and Paekakariki-Raumati.

Regular readers of this blog will have seen a few contributions from Bernie Randall, one of the 5 candidates.  His statement is above.

At present, keeping Rates increases below inflation is pretty much saying there should be no increase at all.  “I am opposed to any increases in water meter charges” is, however, milder than our stance which is to abolish them completely.

The only other candidate who says anything about Rates is Kathy Spiers who says she will “push for the lowering of Rates increases.”

A constituent also rang during the weekend about this.

Robert Thankyoufornotbreeding Atack  Geoff you state you are PRO Forrest and Bird, who are pro 1080, where do you stand on the use of this stuff?
Like ·

Geoffrey Churchman I’m a member of Forest and Bird but vehemently oppose the use of 1080, I figure that stance carries more weight as a member than a non-member. I was actually neutral on the subject until about 7 years ago I and Eva witnessed first hand the devastating effects of poison in a large neighbouring commercial property business which not only killed hedgehogs (no possums that we know of), but also native birds. 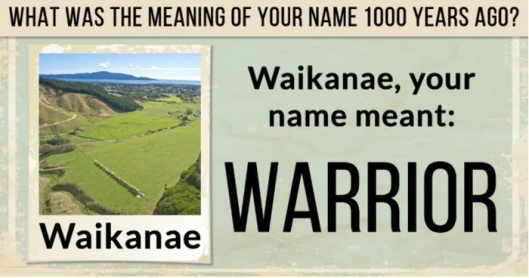 We don’t think so!  The result on one of those lure websites.

Waikanae is a Maori name meaning waters of the yellow-eyed mullet, and Maori is in turn derived from proto-Polynesian.

But Warrior is what we need to be in confronting KCDC’s Boss Dougherty on his ever-increasing expenditure of our money on things that aren’t needed, while ignoring things which are!