By Ralph McAllister
Yes, I know you are sick of confinement, being stopped for testing, sick of walking in circles, missing out on your favourite café food, driving and bubbles.

As most of these restrictions begin to be lifted, I make no apology for my next ruling. Two of the people in my life who have helped my survival in the last seven weeks will now, I hope, benefit. 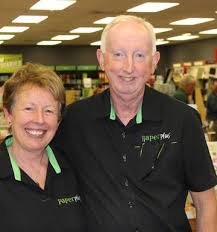 In short, if my friends and acquaintances do not make one of their first actions a trip to their local bookshop to buy a book or three, I shall refrain from talking to them, until they honour my demand. Some might view this as a promise rather than a threat.

Kaye and Rob at Paraparaumu Paper Plus have done me and countless others proud. They and their dedicated staff have helped maintain our sanity, in these last trying weeks recommending books that are as beneficial as the most powerful medicines. 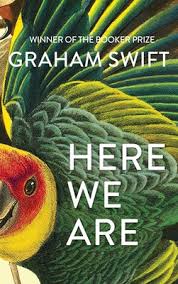 Now you can read my reviews this week with a clear or guilty conscience and act accordingly.

Here We Are by Graham Swift is another winner from the Booker prize author of Last Orders and Waterland.

Evie, was once an assistant to Ronnie, the Great Pablo, entertaining the multitudes who flocked to Brighton Pier in the fifties, to the music hall. She is now looking back on her life and her marriage to Jack the compère, who fell in love with her all these years ago.

Irish Writer does it again

I have been following Derula McTiernan since her first two best selling Irish thrillers The Ruin and The Scholar. Cormac Reilly, her controversial detective leads from the back again.

Loathed by the establishment, separated from the love of his life, now he is exiled from Galway, to work with his domineering father, in a small seaside town. Personal and private matters, corruption and idealism are central to an intricate and fascinating plot.
This can be read as a stand-alone, but The Good Turn should be read in the order indicated, for maximum enjoyment.

One of the best
Finally, easily one of my books of the year.

Code Name Helène by Ariel Lawhon is a brilliantly conceived novel of the wartime heroine Nancy Wake. For once I was pleased of my ignorance of the story of Wake and her heroics in occupied France.

“Not another war story?” I protested to Kaye.

She insisted I read it and I succumbed immediately to the power of Lawhon’s evocation of the past and her juxtaposition of time and place, of her great love affair and her ruthlessness in dealing with enemies and the pomposity of allies.

There have been many other accounts of this woman and her exploits, but this one will do me.

Thanks again Kaye and Rob and, remember, dear reader, I shall be watching you and your bookshop buying habits!